FF leader: No evidence that referenda results have an impact on election outcomes 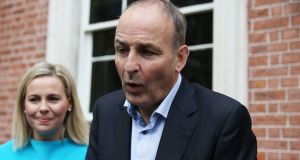 The high level of support for repealing the Eighth Amendment across the country won’t impact on Fianna Fáil’s chances in the next general election despite many of the party’s sitting TDs backing a No vote, party leader Micheál Martin has said.

Many Fianna Fáil TDs such as Bobby Aylward in Carlow Kilkenny and Mary Butler in Waterford were outspoken supporters of retaining the Eighth Amendment but like many others in the party they saw their constituencies return strong Yes votes.

Mr Martin, who campaigned for a Yes vote, said that he didn’t believe Fianna Fáil TDs who called for a No vote, including his Cork South Central constituency colleague, Michael McGrath, would suffer at the ballot box the next time out because of their stance on the referendum.

“I don’t subscribe to the thesis that the referendum result will affect someone’s electoral chances - in previous referendums like this, there hasn’t been a strong correlation between referendum and general election voting and that’s been a fairly consistent pattern over 30 years,” he said.

“Other factors come into play in a general election and I think that will apply here too - sometimes in a referendum like this we see a starkness in the result between a very sharp Yes or No but there is actually a very significant continuum between the two.

“We stated at the outset back in 2013 that on issues like this, there was freedom of conscience within the party and I’ve said that consistently from the very outset and a lot of the parliamentary party were comfortable with that and a lot of them re-iterated that to me over the last 24 hours.”

And he pointed out there were many within Fianna Fáil such as Billy Kelleher, Timmy Dooley, Lisa Chambers, Catherine Ardagh, Jim O’Callaghan, John Lahert and Lorraine Clifford Lee who had called for repeal so there were Yes candidates within the party whom Yes voters could vote for.

Mr Martin’s constituency colleague in Cork South Central running mate, Michael McGrath was a little more circumspect, saying it was impossible to know whether voters in the constituency, which backed repeal by 68.84pc to 31.16pc, would penalise him for his No support in the next election.

“I think abortion is an issue like no other and each individual deputy made their own decision which was born out of their own views and their own convictions and clearly it didn’t align with the views of the majority of constituents in every case,” said Mr McGrath.

“But for most voters, I don’t think it is the defining issue that determines who they vote for - it is probably a factor that is weighed up with other factors so I’m not ruling out the possibility that there will be an electoral impact for me personally or for others who took a particular view.

“That said, I didn’t detect any hostility on the doorsteps. In the last number of weeks, I would have had a lot of discussions with people but got very little flak for the stance I took and I think that most people view it as a very personal issue and respect you once you are open and upfront with them.

“I certainly didn’t get any abuse or any real negativity - of course, some people would have told me that they were of an opposing view and were disappointed with the stance I took but whether they would hold it against me in a general election remains to be seen.