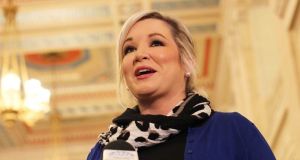 Differences over the Irish language between the DUP and Sinn Féin continue to be a feature of the Stormont negotiations as Dublin and London maintain their pressure for a deal to restore the Northern Executive and Assembly.

On Friday, Sinn Féin deputy leader Michelle O’Neill expressed confidence that any agreement will contain an Irish language act, which is one of its key demands.

This prompted a speedy rejoinder from the DUP leader Arlene Foster who accused Ms O’Neill of continuing to “reiterate her red lines” rather than “look for common ground”.

The Irish language has been one of the main obstacles to a deal to restore Stormont since its collapse three years ago. Northern Secretary Julian Smith has warned that without a deal by Monday week he will call Assembly elections while Tánaiste Simon Coveney said that next week the two governments would publish a text of what they believe constituted a fair deal.

Mr Coveney also said the Irish Government would provide financial support over the coming years to assist in the restoration of Stormont.

The British and Irish governments and the North’s five main parties were very close to an agreement to reinstate the powersharing institutions in February 2018 but that opportunity collapsed because the DUP could not accept or sell a deal on the Irish language to its grassroots supporters.

The proposed 2018 deal involved a form of overarching cultural legislation that applied to the Irish language, Ulster Scots and identity issues, and it is understood the current proposals are along the same lines.

Ms O’Neill said at Stormont that the “issues are well rehearsed” and that the negotiators didn’t “need to go over old ground again”.

“Clearly there will be an Irish language act as part of a deal but what we need to see is a package of measures that allows public confidence to be generated again in our ability to deliver good politics,” said Ms O’Neill.

“There is no doubt that there is a confidence issue in this Assembly and its ability to deliver. What success looks like to me is, yes, there will be an Irish language act and yes, there will be a package of measures that looks at a range of issues.”

DUP leader Ms Foster declined to say whether there would be an Irish language act, but she was critical of the Sinn Féin deputy leader.

“It appears that Michelle continues to reiterate her red lines, I would much prefer to look for common ground in relation to where we’re going for the Executive,” she said.

“Certainly what we want to see is a fair and balanced deal, a deal that respects everyone’s culture, everyone’s identity in Northern Ireland. Certainly there won’t be any attempt in any deal to have one identity placed over another identity - that is very clear,” added Ms Foster.

“Quite frankly, I don’t know where we are. There is a possibility of us achieving a deal but right now we need to concentrate on getting these substantial issues dealt with,” he said. “We need accountable, responsible government going forward. There has got to be change.”

Alliance Assembly member Kellie Armstrong said that Friday’s negotiations were “slow and frustrating”. She said there “have been some positive and proactive conversations happening but we’re just not there yet”.