Co Cork has taken a beating overnight from Storm Ellen experiencing high rainfall extreme wind speeds and flooding. An estimated 40,000 homes and businesses are without power across the county as a result. 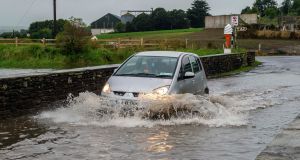 Storm Ellen has caused widespread flooding, including at Timoleague, west Cork (above), and cut power to thousands of homes and businesses. Photograph: Andy Gibson.

More than 50,000 homes, businesses and farms are still without power after Storm Ellen swept over Ireland the previous night, leaving a trail of destruction in its wake.

ESB Networks warned on Thursday that customers impacted by outages needed to “prepare to be without electricity” into Friday and “potentially beyond that”, after about 194,000 properties were affected by power outages due to the storm.

Co Cork was particularly badly hit by Storm Ellen, with flooding reported in Skibbereen, Kinsale, Midleton and Bantry. There was further flooding in low-lying areas of Cork city centre on Thursday evening, after high spring tides.

Cork City Council had issued a warning earlier on Thursday that there was still a significant risk of flooding in parts of the city centre amid high tide levels, and said it had a limited stock of gel bags and sandbags available for collection by members of the public and businesses.

Winds in Co Cork reached almost 145km/h at the mouth of Cork harbour during Storm Ellen, which brought down trees and power lines across Munster. Major routes were cleared following the worst of the weather, but motorists were urged to exercise extreme caution and be alert for fallen trees and spot flooding.

Jim Molloy, acting director of services and roads with Cork County Council, said the local authority had responded to 50 callouts on Wednesday night for fallen trees in east Cork and 30 in relation to flooding, mostly in Skibbereen. It had been “very tempestuous” night, he said, with the storm causing “a lot of chaos”.

Met Éireann’s status yellow rainfall warning, which was issued on Thursday morning for the whole country, is scheduled to end at 5am on Friday, along with a status yellow wind warning for Dublin, Louth, Wexford, Wicklow, Meath, Cork, Kerry and Waterford.

However, the forecaster warned that it would continue to be “unseasonably wet and very windy” until Friday evening, with strong and gusty southwest winds.

“Strong winds at times may result in unsafe conditions and some disruption, especially over high ground, lakes and sea areas,” said Met Éireann.

Widespread, heavy showers are expected on Friday morning, but they will become more scattered during the afternoon and evening, with some sunny spells developing and highest temperatures ranging from 16 to 20 degrees, it said. Winds will stay strong, particularly along coastal areas.

Saturday is due to be a cool and windy day, with a mix of sunny spells and scattered showers and highest temperatures between 15 to 20 degrees. Sunday is also expected to be quite cool, with scattered outbreaks of rain and some sunshine.

The ESB urged customers still affected who usually use electrically powered medical devices to contact their healthcare professional to make alternative arrangements as the network worked to restore power to homes and businesses. The network also reminded customers not to approach broken lines or damaged poles and to keep children and animals away from them.

However, this is the first time there has been such loss of power at this time of year, Mr Hynes told RTÉ’s Morning Ireland, adding that the impact will be different because trees are in full leaf right now.

Met Éireann reported that mean wind speed record for August was broken during the storm.

An Post tweeted that it was experiencing some disruption to its services, particularly in the west and southwest, following the storm.

In a statement on Thursday, it said that it had initially been unable to open 28 local post offices on Thursday morning, largely due to power failures. It said it would work through the night to “ensure service resumption as quickly as possible”.

The town of Skibbereen in west Cork was particularly affected by the downpours, with Bridge Street flooding to a depth of several inches before members of the Skibbereen unit of the Cork County Fire Service, backed up by Cork West Civil Defence, cleared the street.

In Cork city, almost 2,500 customers in Douglas were affected by outages, while more than 400 customers in Bishopstown and 700 homes around Carrigaline in south Co Cork were also affected. There were smaller outages in Kilworth, Rathcormac and Whitechurch.

Local Cork South-West TDs Holly Cairns of the Social Democrats and Christopher O’Sullivan of Fianna Fáil both posted footage on their Twitter accounts of the flooding in Skibbereen, with flood waters racing down Bridge Street in the centre of town.

Mr O’Sullivan tweeted: “This shouldn’t be happening in Skibbereen. Millions spent on flood protection – the entire town should be dry even in this intense rainfall . . . The flood committee flagged that this area needed more protection. OPW need to provide answers.”

Cork County engineer Kevin Morey told RTÉ Radio 1’s News at One that the flood relief scheme in the town was designed to protect against river flooding, and the flooding amid Storm Ellen was a result of the overwhelming of a drain system.