Several prominent sponsors to review their sponsorship of the sport 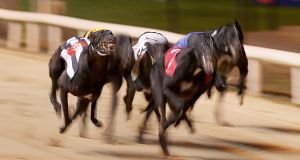 Minister for Agriculture Michael Creed said the industry must refocus its priorities away from breeding and on to animal welfare if it was to continue receiving State funding. Photograph: ©INPHO/ Donall Farmer

One of the largest sponsors of greyhound racing in the State has said it is “appalled” by standards of care revealed by an RTÉ documentary on the industry.

The RTÉ Investigates programme, broadcast last week, raised concerns over the treatment of dogs and the potential widespread culling of thousands of animals based on their performances.

Several prominent sponsors of the sport have indicated they would be reviewing their sponsorship in the wake of the programme.

In a statement, bookmaker Boylesports said that “as a supporter of Irish greyhound racing [it] was appalled at the revelations in RTÉ’s programme”.

“The welfare of greyhounds and the sustainable development of the industry is the prime concern of most participants in the sector and it is unfortunate that the actions of a number of individuals should mar the sector as a whole.”

Boylesports stopped short of saying that it would be reviewing its sponsorship of races, pointing out that all its sponsorship was already under review as a result of changes in the betting tax regime introduced by the Government in the last budget.

“Boylesports is engaging with the Irish Greyhound Board on the future development of the sector to ensure the safeguarding of greyhounds and the future of Irish greyhound racing.”

Insurance company FBD said it was “horrified by the distressing content shown on the RTÉ Investigates programme”.

“While we had a local sponsorship arrangement with Kilkenny Stadium, effective immediately, these greyhound races will not be sponsored by FBD.”

A senior source at the company confirmed that it was evaluating its sponsorship across the sport, as many of the rural farms and businesses which use FBD place a high value on animal welfare.

Barry’s Tea is also reviewing its arrangements with the sport.

In a statement, the company said: “We are very concerned at the revelations highlighted in the RTÉ Investigates programme which aired on Wednesday. We are currently reviewing our sponsorship of the annual race in Curraheen Park, Cork.”

On Sunday Minister for Agriculture Michael Creed said the industry must refocus its priorities away from breeding and on to animal welfare if it was to continue receiving State funding.

Speaking to The Irish Times, Mr Creed said the documentary made for disturbing viewing. However, he expressed confidence that new legislation would allow the Irish Greyhound Board (IGB) to police the industry more effectively.

“I don’t want to say it is all legacy issues because I’m not that naïve, but we’ve just passed new greyhound legislation, signed into law by President Higgins, which gives the greyhound board the tools to deal with the traceability of greyhounds,” he said

“That’s one of the big weakness in the industry in that we don’t know where greyhounds go, what happens to them before, during and after their racing career but the legislation gives the IGB a full range of tools to deal comprehensively with this.

“It is abundantly clear also that in terms of the State funding that’s available to the industry – some €16 million – there needs to be a significant reorientation of that funding away from breeding towards greyhound welfare.”

Minister of State at the Department of Agriculture Andrew Doyle has previously suggested that the Government is going to examine ringfencing some of the money the State gives to the industry every year for animal welfare issues.

Misgivings from sponsors emerged despite the IGB releasing a package of reforms last Friday evening.

The board said it would introduce a “greyhound injury support scheme to provide financial assistance to aid injured greyhounds to continue with a healthy life”, as well as extending and increasing support for the foster care of greyhounds with the hope of identifying new foster homes within the State for greyhounds, it said last week.

It also plans to revise the code of practice on the care of greyhounds to address retirement and transportation issues, as well as financially incentivising the rehoming of greyhounds through additional supports administered through the Irish Retired Greyhound Trust.