1,100 died when, in violent storms in September 1588, three ships from the Armada were driven ashore and wrecked 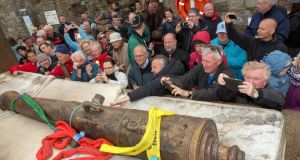 One of six discovered cannons from the Spanish Armada shipwrecks in 1588 at Streedagh, Co Sligo, when it was set down for a public viewing in Mullaghmore, Co. Sligo, in July. Photograph: James Connolly

A ceremony to remember the 1,100 soldiers from three Spanish Armada ships who perished at Streedagh, Co Sligo, more than four centuries ago has been held on the beach there. Hundreds of local people stood for a minute’s silence as the Last Post was played and a wreath carried to the sea by members of the Sligo Sub Aqua Club on Saturday afternoon.

Eddie O’Gorman, chairman of the Grange Armada Development Association, said it was important to mark the spot where so many lost their lives 427 years ago. “Those people got neither a wake nor a burial,” he said.

Locals and tourists etched 1,100 crosses into the sand on the beach to mark each life lost when, in violent storms on September 25th, 1588, three ships from the Armada were driven ashore and wrecked there. La Lavia, La Juliana and the Santa Maria de Vision were part of Philip II of Spain’s failed attempt to invade England.

Attention has focused on the wrecks since the discovery in February of timbers from La Juliana. In June and July, divers from the underwater archaeology unit of the Department of Arts, Heritage and the Gaeltacht recovered several cannon.

Declan Bruen from Streedagh discovered the timbers on the beach. He was among those taking part in the weekend ceremony, the highlight of the Celtic Fringe Festival. “I was with the divers when they brought up the cannons and it was remarkable to think that no one had seen them for 427 years,” said Mr Bruen. “But it was very important not to let the 1,100 people who died here be forgotten in all the excitement about the artefacts.”

Local man Seán Gilmartin (86) from Moneygold said the cannons, which were transferred to the National Museum, should find a permanent home near Streedagh. “I grew up near the beach and it was my playground and somewhere I fished,” he said, “but it was also a graveyard for many and we should remember that locally.”