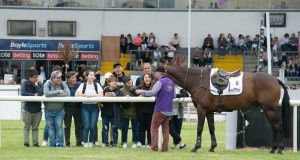 Prof Kabsu Kim from Cheju Halla University, Korea, with a group of 13 equestrian science students, who are on a trip to Ireland to study the workings of the equestrian industry, pictured at a show jumping event in Shelbourne Park. Photograph: Dave Meehan

Wandering around Shelbourne Park on Friday evening, Professor Kabsu Kim was taking in the latest in a string of stops on an intensive five-week tour of the Irish horse industry..

Visiting the Jumping in the City event run by Horse Sport Ireland (HSI), Kim and his 13 equestrian science students were enjoying a broad taste of an industry South Korea is increasingly keen to import.

Asian interest and money is increasingly flooding into the Irish horse world, channelling its way into the export of both sales and expertise.

Earlier this year, HSI signed a memorandum of understanding with its counterparts in the Korea Society of Horse Industry with regard to “knowledge transfers”.

It follows the introduction of official Korean government policy, transposed into legislation, to accelerate the development of its own nascent equine industry, with an eye on the Irish coaching system in particular.

“Ten years ago we began in equestrian sport. Six years ago a law [was introduced] to encourage horse sports in Korea. This means that the government will support [it],” said Kim, whose students from Cheju Halla University represent the initiative’s future.

A vet, who trained in Germany, Kim heads up the four-year-old university department, another string of his government’s ambition.

“I was here before many times when I was in Germany. I came to buy racing horses many times with German trainers,” he says.

“The Irish sport is very high[ly placed] internationally; how to breed and how to organise. Horse Sport Ireland is a very unique organisation.”

Interest from Asian investors has been growing in recent years, both in the number and value of purchases.

In the racing world, Ireland is strongly represented in Hong Kong. There, according to Jeremy Greene at Irish Thoroughbred Marketing (ITM), which promotes Ireland’s bloodstock sector, Irish horses “continually punch above their weight”.

“[They] represent roughly only about 15 per cent of the total population in Hong Kong yet eight of the top 20 horses in the territory at the end of the 2015/16 season last month were reared in Ireland,” he said.

“Owners want a ready-made product, very often for the Hong Kong Derby, a race for four-year-olds, and they are very frequently prepared to pay up to seven figures and more for the right horse.”

Just one example is Designs On Rome, sold by Pat Flynn from Carrick-on-Suir, which went on to win both the Hong Kong Derby and the Hong Kong Cup. To date his earnings are approaching €7 million.

Conservative estimates have 30 Asian-based owners of horses currently in training in Ireland. Investment from mainland China has also been on the up, while interest is also increasing from Singapore-based owners involved in the Hong Kong races.

As regards South Korea, ITM expects its buyers to be active at the prestigious yearling sales at the end of September. Until now, they have largely restricted themselves to American auctions.

It is a belief shared by Pádraic Heanue, manager of the Clifden-based Connemara Pony Sales, which has experienced a surge in Korean interest this year.

In February, a delegation including Professor Kim arrived and toured a number of pony breeders before exporting 27 for a Korean breeding programme. Selected for their temperament and suitability to the Korean landscape, the ponies have surpassed expectations and further purchases are expected in November.

“This has kicked off a new venture for Asian countries [and] there have been one or two more inquiries since then,” said Heanue.

To meet demand, the country is building between 10 and 20 new stable yards every year. Kim believes future deals will follow as Korean investment plans are renewed every five years.