Some snow forecast for east of country next week, says Met Éireann

‘We could see a lot of snow or we might not see any at all’, says meteorologist Liz Walsh 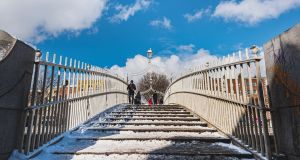 Temperatures are due to drop from Sunday, with light snow showers in Dublin, Meath and Louth. Photograph: iStock

Daytime temperatures won’t rise above 3 degrees for much of early next week, Met Éireann has warned, with some snow showers due to affect the east of the country.

Temperatures are due to drop from Sunday, with light snow showers in Dublin, Meath and Louth.

Met Éireann meteorologist Liz Walsh said uncertainty surrounds conditions from Wednesday, when “we could see a lot of snow or we might not see any at all”.

The forecast was updated on Thursday after an earlier warning on Wednesday from Met Éireann that “significant” quantities of snow could arrive as an Atlantic depression meets cold easterly air from Siberia.

“You wouldn’t be expecting anything more than a covering or maybe one to two centimetres of snow around Monday and Tuesday. It’s likely there will be a yellow ice warning out,” Ms Walsh said.

“It gets uncertain then from there, on Wednesday and Thursday there is rain coming up from the south.

“The question is when this rain comes up from the south, this rain is associated with milder air, and if this rain meets the cold air – where is that going to meet because that’s going to dictate whether it will turn to snow. If you’ve got warm wet air meeting dry cold air, that’s when you get snow happening on the leading edge of that,” she added.

Ms Walsh said Britain is due to experience heavy snow showers along its east coast over the coming days, with half a metre of snow forecast for parts of Scotland.

“That’s for them, that’s not for us,” Ms Walsh added. “We’ll just have to wait and see what happens on Wednesday and Thursday when that milder air tries to break through.

“That’s as much as we know for now. We could see a lot of snow or we might not see any at all. We could also see a lot of snow but it might be short lived, turning back to rain. The greatest chance of snow occurring and staying would probably be over the northern half of the country.”

As of Thursday afternoon, it is forecast that many areas will start off dry on Friday with sunny spells with highest temperatures between four and seven degrees. However, showers will mainly feed into eastern and western coastal counties during the morning, extending further inland during the afternoon and evening.

There will be the risk of hail and isolated thunderstorms on Friday night with frost and possible icy stretches too, in light variable mostly northerly breezes. Lowest temperatures will be between minus two and two degrees.

Saturday will be a cold and mostly cloudy day with scattered showers, mainly across the eastern half of Ireland. Showers may merge into longer spells of rain across some eastern counties with the risk of hail here.

Highest temperatures will be between four and seven degrees in mostly moderate northeasterly breezes.

Conditions will turn colder again on Sunday with highest temperatures of just two to five degrees in a rather brisk northeast wind. Most areas will stay fully dry albeit cloudy but isolated wintry showers may occur.

It will turn very cold on Sunday night with widespread frost and ice. Scattered wintry showers will move into eastern counties and across northern coasts with “a dusting of snow possible”. Lowest temperatures will be between minus three to zero degrees in moderate northeast winds.