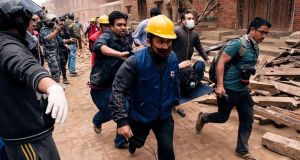 Some 100 Irish citizens are now known to be in the region affected by the Nepal earthquake and the Department of Foreign Affairs said contact had been made with many of them.

A spokeswoman said communications lines had been affected so the process of contacting citizens would take some time.

“The consular response team in Dublin is liaising closely with the team at the Embassy of Ireland in New Delhi which is accredited to Nepal.

“Embassy officials are continuing to work actively with EU and other international partners in the region, with a view to providing practical assistance for Irish citizens,” she said.

Irish aid workers, trekkers and climbers were among those badly affected by the earthquake which has claimed more than 2,500 lives in Nepal.

Dublin climber Paul Greenan was one of several climbers evacuated from Everest base camp after one of his team members, Google executive Dan Fredinburg, lost his life.

Both had been members of a group with the British Jagged Globe commercial expedition company, which has confirmed Mr Fredinburg’s death.

Irish mountaineer and trekking leader Ian Taylor,who was leading an international group to Island Peak and Everest base camp, was in Kathmandu when the earthquake occurred.

While a lot of trekkers travel to Everest base camp in Nepal, Himalayan peaks such as Island (6,189m) and Mera (6,476m) are also popular with experienced Irish mountaineers.

The Himalayan climbing and trekking season extends from March to the end of May, when monsoon weather makes the mountains inaccessible.

Mr Taylor’s wife Laura Gravino told The Irish Times: “Ian had been sitting in a hotel lobby with two of his clients when he described how everything began to move and they grabbed hold of each other, and then ran outside.

“Two more clients were out shopping, but they returned safely to the hotel.

“His head sherpa, Dawa Dhiri Sherpa, had been with him just shortly before that, and so Ian made his way to his house to see that he was alright,” she said. “He described passing five blocks of buildings which were reduced to rubble, and it was very traumatic.

“There is no running water or electricity, and they are trying to conserve the bottled water they have - but they have had food,” Ms Gravino said.

A separate group booked by Mr Taylor’s company for Mera peak had descended due to bad weather and was en route to Lukla airport over the past few days, she said.

“We are hoping that they were at a lower altitude when the earthquake occurred,”she said.

Galway engineer Siobhán Kennedy, who has been based in Nepal for the past 18 months, said the main focus has been on trying to gather information on the full extent of the earthquake’s impact.

“The epicentre was quite a bit away from Kathmandu, and so we are trying to make contact with as many affected districts,” Ms Kennedy, an NUI Galway (NUIG) graduate, told The Irish Times via a satellite phone.

She described how people had been advised to leave buildings in Kathmandu and remain outside for safety reasons, given the extent of the aftershocks.

She said the really serious devastation occurred more than 75km northwest of the capital.

She had first travelled to the region as a volunteer with Irish non-governmental organisation Foundation Nepal, and has since been engaged in road construction in the land-locked state.

She previously worked in Haiti after the earthquake of January 2010 which claimed more than 100,000 lives.

Foundation Nepal’s chief executive Mary McKeown said the expertise acquired by Ms Kennedy would be “invaluable” in this situation, given the fact the Haiti earthquake was of “catastrophic” magnitude, at 7.0.

Ms McKeown said her organisation was meeting in Galway today (sun) amid serious concern about the safety of its staff and the communities of women it has been working with.

For the past eight years the Irish NGO has been engaged in partnership with local communities in the remote Humla region in northwestern Nepal, focusing on women and members of the “untouchable” caste.

“We have 13 staff assigned to work with women on projects such as permaculture to allow them to grow fresh vegetables and to become more autonomous,” Ms McKeown said.

“However, we have had no communication at all since the earthquake, and we have no idea as to how they are,” she said.

“Many of these women are already living in very difficult circumstances anyway, where a good rainstorm can wash away a path, and so an event like this, and aftershocks, could be devastating.

“Our country director, Nirmala Adhikari, has been sleeping outside since the earthquake hit, as has everyone in Kathmandu,” Ms McKeown added.

“They have been told that it is not safe to return to buildings that are still standing for at least 72 hours, and so Nirmala is among several thousand people temporarily located close to an events centre,”Ms McKeown said.

“She has been trying to conserve the battery on her phone while also trying to contact our staff up in the mountains,” Ms McKeown said.

Cork adventurer and trekking company director Pat Falvey said he had no groups in Nepal this season, but had made contact with Pemba Gyalje Sherpa, award-winning international mountain guide and past-president of the Nepal National Mountain Guide Association.

“Both Pemba and his colleague Ang Rita have spoken to me of utter devastation in Kathmandu, and they are on standby for rescue efforts in and around Everest,” Mr Falvey said.

Climber Paul Devaney from Killoe, Co Longford is helping in the rescue effort. He was attempting to climb the highest peaks on all seven continents and Mount Everest was to be his final challenge.

The Irish Seven Summits Facebook page said the aeronautical engineer had been in contact on Sunday morning and confirmed his team were unharmed.

“The scale of the disaster has taken their toll physically and mentally as they and all able-bodied climbers assist the emergency response unit on the mountain, tending to those affected.”

In total, 1,184 names were listed on the page on Sunday evening, with a small number of those identified as being alive.

Christine MacMahon and Ellen O’Connor from west Cork spent a week hiking in the Himalayas before the earthquake struck.

Christine’s mother Frances MacMahon woke to a phone call from her daughter early on Saturday. “She just said, ‘Mum, I’m okay’ - she was using someone else’s phone and she asked me to make contact with Ellen’s boyfriend and others that would be concerned about them,” she said.

On Sunday, the girls made contact with Ellen’s boyfriend Lee Cole shortly before 3pm.

“Lee got a phone call at about 2.40pm from Christine and Ellen to say they had borrowed a phone, that they were in the airport and they were in the queue. That’s all I know really but they seem to be okay,” she said.

A group of eight people from Wexford were also touch with family to say they were safe.

Finding a way out of the affected region is the next challenge for Irish people who have been caught up in the disaster.