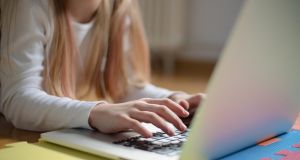 Professor Sonia Livingstone has examined how children’s digital lives ’raise pressing questions about their capacity to act, and about the responsibilities of others, in ways that fulfil rather than undermine their rights’

Social media companies such as Twitter and Facebook should be forced to fund an independent body to teach children how to keep their data safe online, an expert on children’s digital media use has said.

Prof Sonia Livingstone of the London School of Economics was speaking ahead of a public lecture hosted by the Psychological Society of Ireland, the professional body for psychology in the Republic, at Trinity College on Tuesday evening.

Her lecture examined how children’s digital lives “raise pressing questions about their capacity to act, and about the responsibilities of others, in ways that fulfil rather than undermine their rights”.

Prof Livingstone earlier said she believed people were becoming more aware of the extent to which personal data about them were being collected and held about them through apps and online platforms, including their likes, their locations and personal things they may have said and done.

“It’s all being linked and sold to data brokers and then to the advertisers to target advertising at you,” she said.

This was largely done in a commercial context, but the Cambridge Analytica scandal involving Facebook data had also shown that it could also involve political messaging, Prof Livingstone said.

She said this was still a “largely unregulated space” and that most people, including children, could not understand the terms and conditions presented by the major platforms.

“They are beyond the comprehension of most of us. The new [EU] regulation says that they have to be made comprehensible to people who are using the service and that hasn’t happened, so it’s looking like something of a regulatory failure at the moment, but certainly also a platform failure.”

Prof Livingstone, who has advised the British government, the European Union institutions and other organisations on children’s rights, risks and safety in the digital age, said people did not understand what kind of companies were accessing their data.

It was “ not just to sell the latest trainers”, she said.

Prof Livingstone said she was hoping to learn through her Dublin lecture what was going on in Irish schools in terms of educating children “that their lives are lived in this commercial environment”.

She said the Data Protection Commission also had the responsibility of ensuring that children’s data was treated fairly by these companies and she noted the commission’s current public consultation on the processing of children’s data and their rights under the GDPR.

The second stream of the consultation, in which the DPC is supported by the Ombudsman for Children’s Office (OCO), seeks to involve children and young people directly in the classroom.

It has created a pack of consultation materials, including a specially created lesson plan on personal data and data protection rights in the context of social media.

The closing date for submissions for this stream of the consultation is Friday, April 5th. Submissions may be made to childrensconsultation@dataprotection.ie.