Social Democrats claim they could win up to seven Dáil seats 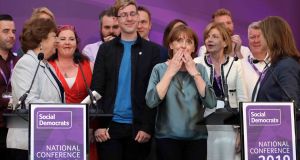 The Social Democrats launched a wide-ranning attack on the Fine Gael-led Government and its market-led solutions to issues such as health and housing at national conference at the weekend.

In their joint address, co-leaders Catherine Murphy and Roisín Shortall moved to position the party firmly to the left with a strong dismissal of capitalism.

“Social Demoracy recognises the greater good over self-interest; the need for social safety nets and it recognises the importance of universalism of public services for all in society,” said Ms Murphy during the course of the speech.

Both TDs called for an immediate national rent freeze, a cessation of all tax breaks to Real Estate Investment Trusts, and also admonished the Government for its lack of financial investment in the Sláintecare model.

In a speech, which was taken as an effort to place the part to the left of the Labour Party, Ms Murphy and Ms Shortall also contended that those in poverty included tens of thousands of ordinary families in their 20s and 30s, who could not afford housing, who had no security of employment and were “just one or two pay-cheques away from homelessness”.

“A capitalist market with free rein will not provide the solution to the social problems it creates,” said Ms Shortall.

Social democracy is fundamentally about moderating the market economy and ensuring it achieves better living standards for all.

“That Fine Gael has favoured a market-based approach to the housing emergency is proof positive that this Government has no intention of making housing affordable,” she added.

At the conference, they also claimed the party could win as many as seven seats in the next general election. The co-leaders said they hoped to build on the local election results which saw the party finish with 19 councillors elected to Local Authorities across the State.

They hailed the results in its first election since it was formed almost four years ago and suggested the performance was even more impressive given the surge in support for the Green Party.

The two leaders said that despite aligning with Fianna Fáil in some local authority areas after the election it was not a foregone conclusion that the Social Democrats would support a Micheal Martin led Government after the next general election.

They said its decisions would be based on programmes for government rather than arrangements at local level before the election.

On the growing dominance of international investment funds on the rental sector which, they said this was pushing up prices and driving insecurity among renters.

The two leaders said they were “very concerned about the impact of bulk property purchases by Real Estate Investment Trusts on the planning, availability and ultimately the price of housing”.

“This means restrictions on international investment funds and the proliferation of their luxury and unaffordable version of the rental sector. We want to end all special tax benefits to REITS and legislate to ensure that REITS are not allowed to dominate the rental market.”

The party has also called for a temporary national rent freeze and said while such a move would be temporary it was “a necessary measure to stop the further deepening of the housing crisis”.