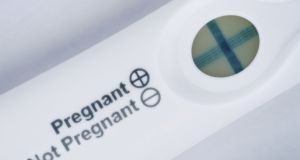 Abortion is legal in the North where there is a threat to the life of the woman or where there is a risk of a serious and adverse effect on her physical or mental health which is either long term or permanent. Photograph: Thinkstock

There were 16 abortions in Northern Ireland from April 2014 to April 2015 which is a reduction of seven on the previous year, according to the latest figures from the North’s Department of Health.

The number of abortions in that period was considerably lower than in recent years in Northern Ireland.

Abortion is legal in the North where there is a threat to the life of the woman or where there is a risk of a serious and adverse effect on her physical or mental health which is either long term or permanent.

Referring to the lower number of abortions in 2014-2015 compared with recent years a spokesman for the department said, “Due to the small numbers involved relatively large fluctuations can be expected year on year.”

He also referred to “some suggestions that the 2013 consultation on guidance on termination was having an impact on the numbers recorded”.

“The Minister [the DUP’s Simon Hamilton] has made clear he is determined to publish revised guidance for health professionals at the earliest opportunity. A draft is currently with the Executive for approval and the Minister remains hopeful this can be secured very shortly,” added the spokesman.

Meanwhile, the Northern Ireland Human Rights Commission said it will resist a legal challenge by the North’s Attorney General John Larkin, QC, and the Department of Justice to a recent High Court decision that would allow abortion in limited circumstances.

At the end of November, Mr Justice Mark Horner ruled that abortion legislation in Northern Ireland breached article eight of the European Convention on Human Rights – the right to privacy – in relation to fatal foetal abnormality and pregnancy as a result of rape and incest.

The Northern Assembly would have to bring in new legislation to make his ruling effective.

This week Mr Larkin and the Alliance Minister for Justice David Ford confirmed they would be appealing Mr Justice Horner’s judgment. Mr Ford on Wednesday expressed concern that a lack of “legal certainty” could lead inadvertently to abortion on demand in Northern Ireland.

This prompted Les Allamby, the chief commissioner of the North’s human rights commission, to state that he would resist these appeals.

“The commission will now cross appeal both the Department of Justice and the Attorney General. We will reintroduce all of the original grounds brought before the court,” he said.

Mr Allamby said this would include a call for abortion to be permitted in cases of “serious malformation of foetus” – above and beyond fatal foetal abnormality – which was rejected by Mr Justice Horner.

“The commission continues to seek a change to the law so that the human rights of women and girls are protected when facing these difficult decisions,” he added.

1 Midlands lockdown: Movement restrictions in place for residents of Kildare, Laois and Offaly
2 Main points: What restrictions have been imposed on Kildare, Offaly and Laois?
3 ‘Draconian’: TDs from across Midlands shocked and angered over lockdown
4 Masks Q&A: Who has to wear them in shops and what happens if you don’t?
5 Cambodia Bill to ban women wearing short skirts sparks outcry
Real news has value SUBSCRIBE