Sir Keir Starmer report is a vindicaton of Maíria Cahill

Barra McGrory apologises to Cahill over ‘cock-up not conspiracy’ 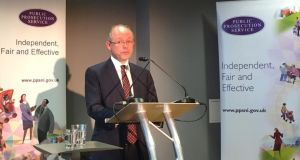 “That’s a fair description,” said Barra McGrory when asked if his Public Prosecution Service’s handling of the Maíria Cahill sex abuse and IRA interrogation allegations was a case of cock-up rather than conspiracy, but nevertheless a monumental cock-up.

Cahill said she cried yesterday when she met Sir Keir Starmer QC who wrote the damning report, and she cried too a short time later when she met McGrory, the North’s Director of Public Prosecutions, to hear him issue his apology directly to her.

Emotionally, this is still causing Cahill great grief, and it’s fair to surmise that the two anonymous women who were also allegedly sexually abused by IRA man Martin Morris are in the same fragile state.

But Cahill can enjoy a huge sense of vindication. Her dogged stance, her persistence and her courage have paid off. She has been proved correct.

That’s important because, apart from the legal and political implications of this case, there were also quiet attempts in certain quarters to undermine Cahill, some elliptical commentary questioning her bona fides, and suggestions that perhaps there was some form of covert anti-Sinn Féin agenda.

The question was asked as to why she didn’t make her allegations in the witness box and test whether her evidence would be found credible.

But what was crisply clear from Starmer’s 45-page report was that Cahill at that stage realised that such was the total botch the North’s Public Prosecution Service (PPS) had made of the case, there was probably little chance of success.

The truth is that throughout the four years of her ordeal, from when she first made her allegations in 2010 to the collapse of the cases in 2014, Cahill had a better grip on the case than some of the learned silks and junior counsel associated with the PPS.

It was a point well made by another QC, Jim Allister, leader of the Traditional Unionist Voice party. “It is a sad commentary on the prosecution that Maíria Cahill seemed to have had a better grasp of tactics and what needed to be done than the prosecutors themselves, but she was treated, largely, as unimportant. Shame on all who let her down.”

Starmer in his report acknowledged as much when he wrote that “given the failings in this case, it was almost inevitable” that the three women “would pull out of the process”.

So, Cahill can take comfort from those findings: she has proved that she was badly let down by the North’s prosecution service.

The four people who allegedly subjected her to a “kangaroo IRA court” also were acquitted and won’t face any further charges relevant to that alleged interrogation.

Starmer found the PPS mishandled the cases for a number of reasons. Primarily it was a case of poor prosecutorial strategy, as McGrory accepted. This related to how the allegations were broken down into three separate cases: the sex abuse allegations case against Morris; the separate case of four people charged with IRA membership in relation to the interrogation claims; and the third case of IRA membership against Morris.

There was also the issue of sequencing. Instead of running the sex abuse case first, it was decided the IRA membership case against Morris should happen first, followed by the membership cases against alleged IRA members Padraic Wilson, Séamus Finucane, Agnes McCrory and Briege Wright. Only then would the sex case proceed.

Organisational problems also arose through the fact that over the four-year course of the cases there were three DPPs in place: the late Sir Alasdair Fraser, who had been ill; an acting DPP; and McGrory who took over in November 2011.

He also excused himself from any involvement because as a solicitor he had acted for Padraic Wilson and Agnes McCrory.

Moreover, the PPS’s directing officer who had immediate responsibility for the cases had four changes of line manager over the four years, creating, as Starmer also found, further shortcomings in relation to policy and guidance and a lack of strategic thinking.

But centrally and most importantly, rather than three cases, they should have been prosecuted as one interlinked case.

“They should never have been separated in the first place,” said McGrory. “That should have been obvious.”

“The case was misread in that it was treated as two separate cases, the membership case on one hand and the sex abuse case on the other hand,” he said.

McGrory has a good defence in that he was not involved in the case and he acted properly to elucidate what went wrong. He now plans to put in place a range of recommendations from Starmer to try to ensure no such future blunders.

In the meantime Cahill presses on. She awaits the report from the North’s Police Ombudsman Dr Michael Maguire on how the PSNI dealt with the investigation.