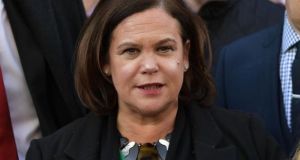 Over the next fortnight, meetings are planned for Dublin, Galway, Cavan and Newry, but with the first taking place in Cork on Monday night. Photograph: Charles McQuillan/Getty Images

Sinn Féin leader Mary Lou McDonald has announced plans to hold a series of public meetings over the next two weeks, starting in the Cork South Central constituency where Fianna Fáil leader Micheál Martin is a TD.

The meetings aim to rally public support for Sinn Féin’s efforts to get into government. Over the next fortnight, meetings are planned for Dublin, Galway, Cavan and Newry, but with the first taking place in Cork on Monday night.

Ms McDonald said Sinn Féin had not only obtained the largest number of votes in the general election but received more votes for the position of taoiseach than either Mr Martin or Fine Gael’s Leo Varadkar when nominations were sought for the position in Dáil Éireann on Thursday.

“It is now emerging is that there will be a clear choice to be made - on the one hand for a government of change or on the other hand, the carve up of power again between the two old parties of Fianna Fáil and Fine Gael and I know which of those the people want,” said Ms McDonald.

Posters for the Sinn Féin public meeting with Ms McDonald at the Rochestown Park Hotel began appearing around Cork on Friday advertising the rally, which will also feature TDs Pearse Doherty and Eoin Ó Broin.

Sinn Féin performed well in Cork with the party holding its seats and topping the polls in Cork South Central and Cork East through outgoing TDs Donnchadh Ó Laoghaire and Pat Buckley, while Cllr Thomas Gould was elected on the first count in Cork North Central where Sinn Féin TD, Jonathan O Brien was stepping down.

Ó Laoghaire’s achievement in getting elected on the first count in Cork South Central was particularly noteworthy given he was up against Mr Martin, Tánaiste Simon Coveney of Fine Gael and Fianna Fáil finance spokesman Michael McGrath.

United Ireland rhetoric ‘fuelling unionist ire’ over NI protocol 16:31
UK ‘cannot be trusted’ on Northern Ireland protocol, says Simon Coveney 16:22
Man whose wife died from cervical cancer to use settlement to fulfil wish for child by surrogacy 15:47
Vaccination of ‘high risk’ citizens against Covid-19 to begin next week, Dáil hears 15:46
Staying away is so alien to Travellers that it is ‘countercultural’ 15:21

3 Vaccination of ‘high risk’ citizens against Covid-19 to begin next week, Dáil hears