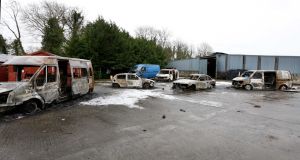 Burnt out vans and cars at the house which was the scene of the eviction in Strokestown. Photograph: Brian Farrell

Sinn Féin TD Maurice Quinlivan has told the Belgian-owned KBC bank that it will “not stand by” and see Irish people evicted from their homes following the eviction of three siblings from a farm in Strokestown, Co Roscommon.

“What happened there was totally unacceptable; that masked people like that can go in and evict Irish people out of their homes. It’s absolutely simply not acceptable and we won’t stand for that,” Mr Quinlivan said.

Sinn Féin, he said, had put “down a marker” for all banks and vulture funds “that anybody who tries to evict a family from their home against their wishes” will face a national protest campaign.

A Limerick protest was attended by 20 people. During a meeting with the O’Connell Street branch manager, Mr Quinlivan and SF Senator Paul Gavin said: “We were putting [them] on notice, [and] I asked him to pass on our comments to the CEO of his bank [that] this probably wouldn’t be a one-off if [KBC] were going to be doing this again.

“I think it’s an issue that’s going to take traction, and people are going to get involved in this. People were horrified at what happened in Strokestown, and I think KBC might have unleashed something that they didn’t want to.”

Separately, gardaí are investigating a fire at a KBC bank building in Dublin’s city centre on Thursday night. The incident occurred at around 11.25pm at the premises on Sandwith Street. Windows were broken and a fire started in the lobby.

A protest organised by Republican Sinn Féin will take place on Sunday in Strokestown following the eviction of Anthony McGann, and his two siblings. Mr McGann has debts running to €300,000 with KBC dating back more than a decade.

Meanwhile, two men arrested in connection with an attack on the security workers who evicted the siblings have been released following questioning by gardaí. A file is being prepared for the Director of Public Prosecutions.

They were arrested on Wednesday and detained at Castlerea Garda station under Section 30 of the Offences against the State Act 1939. A firearm was also recovered during the investigation, although it is not clear if this was the same one used in the attack.

“The investigation is ongoing, and gardaí wish to renew their appeal to anyone with information to come forward and contact us here at Castlerea Garda station on 094 9621630 or the Garda Confidential Line 1800 666 111,” a Garda spokesman said.

During the attack a dog was fatally injured and six vehicles owned by the security workers were set alight. Gardaí believe the gang arrived at the scene in a cattle truck.

A number of searches took place in counties Dublin, Meath and Roscommon on Monday and Wednesday. As well as a truck and the firearm found, gardaí have also taken mobile phones and documents for examination.

On Thursday, the Private Security Authority announced it was investigating the conduct of the security company which evicted the McGanns and took possession of the house on behalf of KBC on Wednesday last week.