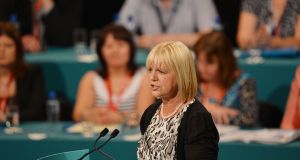 Sinn Féin TD in Cork East Sandra McLellan is facing a challenge at the party’s selection convention at the weekend which will choose a candidate to run in the general election.

Cllr Pat Buckley of Midleton confirmed to The Irish Times he has put his name forward and will be seeking a nomination to run for the party in the four seat constituency.

“My reasons for going forward are number one to show that we still have a democratic process within the party where any member of the party can put their name forward for nomination,” he said.

“Number two, I love what I do and I see what’s happening on the ground in terms of Government austerity policies and poverty and it’s not pretty and I want to do something to try and change that,” he said.

Cllr Buckley said the decision should not be seen as a criticism of Ms McLellan’s work as a TD and he stressed he had great respect for her personally and politically.

“I’ve always worked well with Sandra ever since I joined Sinn Féin and we still do, and my seeking a nomination is not disrespecting Sandra, it’s just that you are entitled to go in a democratic way,” he said.

Sinn Féin in Cork East was plunged into turmoil earlier this year when the party decided to expel one off its longest serving members, newly elected Cllr Kieran McCarthy from Cobh.

Cllr McCarthy was expelled by the party after a review of party structures in the constituency. Mallow-based Cllr Melissa Mullane was also suspended for 12 months.

The party has since lifted the suspension of Cllr Mullane, but her readmission to the party last month led to the resignation of Mitchelstown-based Cllr June Murphy.

Meanwhile Cllr McCarthy, who accused the party of stabbing him in the back when expelling him, has already declared that he will be running in the general election as an Independent candidate.

Over 200 delegates are eligible to vote at the Sinn Féin convention at the Radisson Blu Hotel in Little Island on Sunday. The party is expected to run just one candidate.

Speculation is mounting in Cork East that Fianna Fáil are about to add Barbara Ahern, the daughter of former TD Michael Ahern, to its ticket for the general election.

Cllr Kevin O’Keeffe, son of former TD Ned O’Keeffe from Mitchelstown, who lost out to Ms McLellan for the last seat in 2011, was selected at convention in June to run for the party again.

Sources close to both the rival Ahern and O’Keeffe camps have told The Irish Times that they expect Ms Ahern to be added to the ticket.

Last month, Michael Ahern told The Irish Times he was hopeful his daughter would be added to ensure that Fianna Fáil had a candidate to cover the southern end of the constituency.

A graduate of UCC and UCD, Ms Ahern has worked with KPMG in Gibraltar for the past two years but is understood to be returning to Cork shortly.

Contacted about the possibility of Fianna Fáil adding Ms Ahern to the party’s ticket in Cork East, a party spokesman said the issue was “under active consideration” by the party.

It is understood a decision is likely to be taken next week by the party’s the National Constituencies Committee when it meets next Tuesday and an announcement is expected soon after.