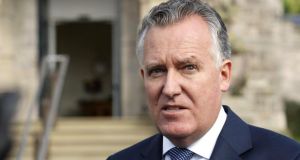 Former northern secretary Peter Hain insisted the deal over letters of comfort was not a secret one. Photograph: Paul Faith/PA.

Sinn Féin will not deal with the House of Commons Northern Ireland Affairs committee which is dealing with the issue of the so-called on the runs (OTRs), Deputy First Minister Martin McGuinness has said.

The Westminster select committee has interviewed a number of politicians and serving and former police officers about the system, under which former IRA members were given letters of assurance that they did not face a threat of prosecution from the authorities.

Controversy erupted over the system earlier this year when a London court ruled that Donegal man John Downey should not be tried for the 1982 Hyde Park bombing in London, in which four soldiers died, because he had a letter of comfort telling him he did not face prosecution.

It emerged that nearly 200 republican OTRs were given such letters. Unionists said they did not know of the deal, with First Minister Peter Robinson at one stage threatening to resign over the issue.

While Sinn Féin and , British prime minister David Cameron partly placated Mr Robinson by ordering an inquiry into the matter, to be carried out by Lady Justice Heather Hallett.

Mr McGuinness said yesterday that Sinn Féin justice spokesman Gerry Kelly would not give evidence. “Sinn Féin has clearly outlined our position on the issue of on the runs and despite claims to the contrary, neither this process, nor the agreements on which it was based, were secret or hidden,” he said. “However, in the interests of transparency and in an attempt to minimise the damage to the peace process from a growing public controversy, Sinn Féin agreed to participate fully and willingly in the Hallett review. To that end our party president Gerry Adams, Gerry Kelly and myself met with the Hallett review team [last week] and put Sinn Féin’s position on this and other legacy issues on the record,” he said.

“We see no point therefore in Gerry Kelly attending the Westminster select committee into the issue,” he added.