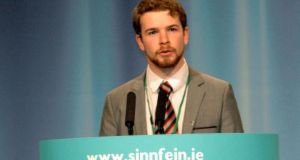 Sinn Féin has selected a member of Cork County Council, Cllr Donnchadh O Laoghaire to run for the party in Cork South Central after he defeated party colleague Cllr Chris O’Leary at the second attemp

Sinn Féin has selected a member of Cork County Council, Cllr Donnchadh O Laoghaire to run for the party in Cork South Central after he defeated party colleague Cllr Chris O’Leary at the second attempt.

Both candidates received exactly the same amount of votes at a selection convention last month but in a re-run of the convention this afternoon, Cllr O Laoghaire, who is 26, won by two votes in a contest which saw just over 100 delegates from the constituency vote

Speaking after his victory, Cllr O Laoghaire, who was elected to Cork County Council last year, said he was deeply honoured to be chosen by the party membership to contest the general election in Cork South Central.

Cllr O Laoghaire went on to pay tribute to Cllr O’Leary, who had previously run for the party in Cork South Central in the 2011 general election when he missed out on the fifth and final seat to sitting Fianna Fáil TD, Michael McGrath.

“I want to pay tribute to Chris O’Leary, who is an outstanding community activist, a superb councillor, a credit to his community and someone I am proud to consider a comrade, and I want to thank him for his remarkable magnanimity this evening.”

Cllr O Laoghaire, who comes from Togher on Cork’s southside, polled 2,567 first preferences or 10.99pc of the vote in the Carrigaline-Ballincollig Electoral Area of Cork County Council but he faces a tough challenge to win a seat for Sinn Féin in what promises to be a highly competitive Dáil constituency.

Since the 2011 general election, Cork South Central has been cut from five to four seats with Cllr O Laoghaire going up against several high profile TDs and big voter getters, including Fianna Fáil leader Micheál Martin and Simon Coveney of Fine Gael.

But Cllr O Laoghaire was upbeat following his selection on Saturday afternoon and, pledging not to let the party’s membership down, he issued a rallying call to the membership, saying that “the campaign starts in earnest now”.

“Cork South Central has been represented by the three traditional parties for far too long now. There is a need for an alternative voice, to provide a real and credible alternative to austerity. I will be that voice, and I am greatly looking forward to the campaign.”