Register is 'cleansed' in canvass year, meaning all who wish to vote mus re-register 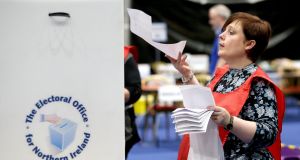 A count supervisor sorts voting papers at the Titanic Exhibition Centre, Belfast. ‘A lot of us were fairly bemused at the Sinn Féin reaction to the Electoral Office’s legal duty to refresh the register,’ said SDLP leader Colum Eastwood.

In the North, the significance of a vote runs deep.

Sinn Féin has criticised the proposed updating of the electoral register as “a mass purge of voters” and a “blatant attempt to suppress the votes of citizens right across the North of Ireland”.

To vote in Northern Ireland, an individual must be on the electoral register. This year is a canvass year, when the register is “cleansed”. All the names are removed, and eligible voters are required to reregister – a legal requirement to ensure it is up-to-date and accurate.

In a society long known for its enthusiastic invocation of the maxim “vote early, vote often”, there has been scepticism and suspicion about such a vociferous response to what most see as a regular exercise carried out in a normal democracy.

“A lot of us were fairly bemused at the Sinn Féin reaction to the Electoral Office’s legal duty to refresh the register,” said SDLP leader Colum Eastwood.

“The Trumpian tactics seen on social media videos and so on were interesting to the many people who have seen Sinn Féin operate up close at elections, and people are wondering why they reacted so forcefully to it.”

Alliance MLA Andrew Muir characterised it as “disgraceful scaremongering more worthy of Donald Trump” and First Minister Arlene Foster asked Facebook and Twitter to remove posts that she says “create and spread false statements designed to cause confusion and misunderstanding”.

Some have questioned whether this is a rallying cry to the party’s base ahead of the Assembly elections next year, or whether it is about getting the retaliation in first so that there is a focus for blame if the party performs poorly, just as Trump had.

Political commentator and former SDLP vice-chair Tom Kelly has another theory – the issue is a “distraction” from the report into Belfast City Council’s handling of Bobby Storey’s funeral and a way of “riling up” Sinn Féin supporters “that just didn’t take off”.

One former party election worker recalls people arriving at polling stations to vote and discovering they were not on the register.

“There’s something fundamental about it. I’ve seen people almost in tears because they didn’t get their vote,” they said. “The on-the-ground operation is always focused on getting people on the register, then you get them to vote, then you try and get them to vote for you. There’s a feeling that you invest all this work in it, and then it’s all wiped out.”

Maskey says he wants to see “more people voting, and people from all sorts of different backgrounds”.

He stresses that the timing – given the ongoing Covid-19 uncertainties – is his greatest concern. Other issues, he says, include the fact that people from working-class or socially deprived areas are least likely to register and a lack of access to electronic devices could impede doing so online.

Maskey also questions whether the Electoral Office can complete the necessary work in time and calls for the creation of a “modern, fit-for-purpose register” where newly eligible voters are added automatically and voter details are confirmed – as in Britain – rather than removed.

Put to him that claims of a “purge” and “organised voter suppression” are simply not true, Maskey replies: “If they wipe the register then you have a mass purge and suppression, because people can’t get back on the register and then they’re being suppressed from doing that ... we’re in the middle of the pandemic and there’s no guarantee you’ll get people back on.”

Following the last canvass in 2013, an Electoral Commission report found the register’s completion rose by about 15 per cent – with 47,196 names added. It went from having 270,000 inaccurate entries to “a very high level of accuracy”.

Approximately 120,000 people who had not responded to the canvass remained on the register for a further three years while the Electoral Office continued to encourage them to register. Almost 70,000 names were removed before the Assembly elections in 2017.

A canvass was due last year but was postponed due to the pandemic. It will now run from July 1st to December 1st, but people can register at any time even after the canvass.

“The bottom line is that this is what the democratic institutions have decided is the way they can assure the public that everybody who gets the vote is eligible,” said the North’s chief electoral officer, Virginia McVea.

“You have to be able to assure the public that every ballot is allocated to an eligible, real person who genuinely lives at that address. You need an accurate register to have confidence in the democratic process.”

Jon Tonge, professor of politics at the University of Liverpool, said the optics of this argument look bad for Sinn Féin as the party appears resistant to what are genuine checks on the bona fides of registered voters.

He said he understood its suspicion of electoral malpractice, “which passed for daily life in the old Northern Ireland, but not today”.

He recalled caravans being placed near polling stations “where people just got changed and went in [and voted] again, sometimes they changed gender ... it just accepted that all sides did it”.

“The reason bodies like the Electoral Office exist is to stop those shenanigans.”