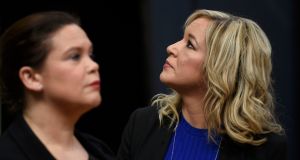 The Sinn Féin leadership has used 1916 commemorations North and South to stress that Ireland’s political landscape is set to change “dramatically” as a result of Brexit.

The party said the vote of the majority of people in Northern Ireland to remain in the EU “brought the issue of Irish reunification firmly back on the political agenda”.

She said in Northern Ireland the majority who voted to remain in the EU were “nationalists, unionists, republicans and others” who did so because they saw it was “in their best interests politically, socially and economically” and because they did not want to see any strengthening of the border in Ireland.

She said Taoiseach Enda Kenny now needs “to make it clear that his government will formally adopt the case for designated special status for the North within the EU as a negotiating position when he enters the Brexit negotiations”.

She said the island needed to “prepare for Irish reunification now”.

However, she said there needed to be an honest conversation about inclusivity across the island. “An Ireland that is Orange and Green, black and white, settled and traveller, gay and straight” she said.

The future should encompass “an Ireland that protects the many and not just the privileged few”, she said. “We proclaim the message of liberation and love, of freedom and fraternity this Easter Sunday here in the proud city of Derry, unrepentant Fenians, irredeemable believers in the cause of Ireland and in the equality of our people” she said.

Both Sinn Féin leaders also paid tribute to the former Sinn Féin deputy first minister of Northern Ireland Martin McGuinness. Ms O’Neill said his death “has come as a huge shock and loss to the party and his comrades, the people of Ireland and of course his wife Bernie and close family circle.

“Martin McGuinness was a towering pillar of strength and his commitment and determination never once faltered over forty years of struggle,” she said.

Ms O’Neill said she had “the personal honour of serving alongside Martin as an MLA for Mid-Ulster and as Minister for five years under his stewardship”.