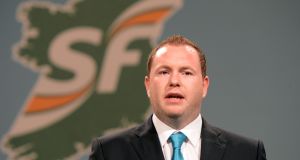 Sinn Féin has questioned unionists’ response to the declaration by the Ulster Defence Association (UDA) that it remains in existence and has no intention of disbanding.

As political talks dealing with the issue of paramilitarism continue at Stormont the UDA in south Belfast issued a statement insisting it “won’t be leaving the stage”.

The UDA in the article said it would wait to see which way the talks panned out. “But rest assured the UDA are still in existence and won’t be leaving any stage whilst republicans of any faction still exist,” it added.

“The organisation was set up with the protection of their community at its heart and this we will maintain.”

Last night, Sinn Féin Assembly member Chris Hazzard remarked upon the lack of discernible unionist political reaction to this warning compared to its reaction to the murder of Mr McGuigan, and the chief constable’s statement.

“Political unionism’s leaders have been at pains recently to attempt to justify, with much faux outrage, their walk-out from their (Northern) Executive responsibilities,” said Mr Hazzard.

“Their silence today on the continued existence of the UDA is in contrast deafening.

“This is the same UDA which murdered Brian McIlhagga earlier this year and which has continued its involvement in pipe bombings, intimidation, arson, drug dealing and extortion over the past number of years.

“This is the same organisation which nailed a man’s hands to a table in July,” he added.

“This is the same UDA whose political wing unionism stood shoulder to shoulder with in an effort to force an Orange march through a nationalist community,” he said.