Sinn Féin promises to halve the cost of childcare 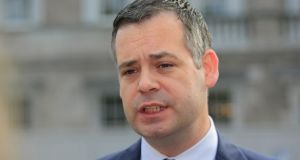 Sinn Féin says it will raise €2.4 billion in taxes to pay for new spending measures such as increased investment in housing, health and childcare.

The party has published its alternative plans ahead of Minister for Finance Paschal Donohoe announcing Budget 2019 in the Dáil next week.

In health, Sinn Féin says a proposed €450 million in new money will be used to open 500 additional beds at a cost of €156 million; reduce the cost of medicines by cutting prescription charges by €1; recruit more medical staff at a cost of €46 million and increase funding to CervicalCheck and BreastCheck by 10 per cent each.

The party says it will halve the cost of childcare by increasing the subsidy for the Affordable Childcare Scheme from 50 cents to €2.50 per hour, at a total cost of €42 million.

It also says a tax relief for renters, which it claims would be worth one full month’s rent, will cost €265 million. The Local Property Tax would also be gradually abolished over three year period.

The party says the EU’s medium term budgetary objective is met through a balance of €1.1 billion being reached after extra tax and spending measures.

A €400 “second home charge” would yield €68 million, while a 3 per cent increased in capital acquisitions tax would bring in €43 million.

Increasing excise on cigarettes by 50 cent would bring in €58 million, while €106 million would be gained from increasing commercial stamp duty by 1 per cent.

The special 9 per cent VAT rate would end for the hotel sector alone, yielding €280 million.

Corporation tax exemptions for banks such as Bank of Ireland, AIB and Permanent TSB would also end, bringing in €750 million. The single biggest revenue raising measure under the Sinn Féin plan, however a levy on intellectual property assets brought to Ireland by multinationals on a tax free basis. It would bring In €750 million.

The polices for higher income earners are a change on previous years, when Sinn Féin proposed that those earning €100,000 would pay a seven per cent rate on income above that level. However, party figures have said the moves - when taken together - do not reduce the hit being taken by those above €100,000.

“Now is not the time for us to increase our borrowing. When an economy is going well, when it’s growing fast, when you have full employment that’s when you should be trying to balance the books and trying to run a surplus,” Mr Varadkar said.

He said that “whatever social problems we have now they will be much worse in a few years time if we make reckless financial decisions and increase borrowing”.

He was speaking in the chamber after Sinn Féin leader Mary Lou McDonald noted “from your twitterings” that he had taken a look at Sinn Féin’s proposals. But she suggested that he should study them in detail first.

Mr Varadkar said he had looked at them and promised to study the plan in more detail.

But he also said that “with Brexit coming up in a few months time I think cancelling the rainy day fund is a very reckless proposal”.

He said that “when you base your economic policy on 20 tax hikes raising €20 billion it isn’t long before you start hitting average people with your tax hikes.”