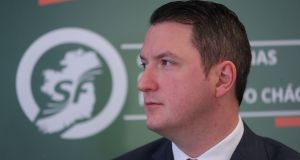 Sinn Féin’s John Finucane was elected as the MP for North Belfast in the 2019 election. Photograph: Niall Carson/PA

Sinn Féin had the highest campaign spending of any political party in Northern Ireland in the December 2019 Westminster election while the Greens had the lowest – a spend of just 75 pence.

Figures from the Electoral Commission published on Thursday show that Sinn Féin party expenditure on the election was £36,684 (€40,640). It won seven of the 18 seats.

The ten political parties that contested the general election reported spending a combined total of £120,996 during the regulated period that ran from December 13th, 2018, to polling day on December 12th last year.

The next highest in terms of party spending was the Conservative party. It paid out £22,017 for a return of 5,433 votes.

Alliance was third on the list, spending £21,778 and winning one seat in North Down.

Of the other unsuccessful parties Aontu spent £678, People Before Profit spent £130, and the Greens, £1. The United Kingdom Independence Party spent nothing and won 1,687 votes.

The Green Party in Northern Ireland, who will have a major say in whether the Fianna Fáil-Fine Gael-Green coalition will get off the ground, ran three candidates, winning just under 2,000 votes.

The party spent 75 pence with a printing and graphics firm but this was rounded up to £1, the commission explained.

This, however, did not include the individual spending of each candidate, which is additional to party spending.

Candidates each were entitled to spend up to £30,000 but even here the Greens were thrifty. Candidate Susan Glass spent £1,140 in West Tyrone, Maurice McCartney spent £124 in Strangford, and Philip Randle spent £78 in East Antrim.

Cahir Hughes, head of the Electoral Commission in Northern Ireland, said it was “vital that voters are able to see clearly and accurately how money is spent on influencing them at elections”.

He added: “For future elections, we have recommended that the law be changed so that parties and campaigners have to provide voters with more detail about how they spend their money at elections.

“This sits alongside other recommended changes to improve transparency and to address public concerns about who has produced and paid for the political campaign material they see online.”