“Staying out does not work,” says Micheál Martin in Belfast 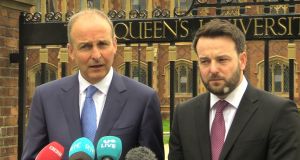 The botched renewable heat incentive (RHI) scheme was no reason for Sinn Féin to bring down the Northern Executive and Assembly, the Fianna Fáil leader Micheál Martin said in Belfast on Monday.

Mr Martin, who was canvassing in the city with SDLP leader Colum Eastwood in the North’s local elections, said in his view “there never was a justification to collapse the executive”.

Powersharing broke down in January 2017 when the late Martin McGuinness resigned as Deputy First Minister over the DUP’s handling of the RHI scheme which could result in an overspend of hundreds of millions of pounds.

Mr Martin however said in Belfast that Sinn Féin exiting the Executive was not warranted. “I don’t think the heating scheme was a good enough reason to collapse the Executive on day one, and I think the issues that are there can be resolved without necessitating the continued absence of an Executive and Assembly,” he said.

Mr Martin who earlier this year signed up to a formal partnership with the SDLP said the local elections on Thursday and the scheduled European Parliament poll at the end of the month would provide an opportunity to allow people’s voices to be heard.

“I think people should indicate that they want people back in the institutions, back in the Assembly, back in the Executive. I would always be hopeful that people will see the light of day. Staying out does not work,” he added.

Two of the key issues blocking a deal to restore Stormont are the absence of an Irish language act and of same sex marriage legislation. Mr Eastwood, supported by Mr Martin, had proposed that the petition of concern be temporarily suspended so that gay marriage legislation could be introduced if devolution is restored. The DUP has used the vetoing mechanism of the petition to block changes to the law.

“What has it done? It has led to longer waiting lists, schools being defunded, Brexit happening and us not there to do anything about it. That is the reality. The strategy that Sinn Féin has deployed has totally and abjectly failed, it may be time to think again.”

Meanwhile, the Sinn Féin leader Mary Lou McDonald said her party was ready to engage “energetically and positively” in the all-party talks hosted by the British and Irish governments that are to start next week.

She added however if these talks failed that the British and Irish governments must intervene. Ms McDonald recently called for joint sovereignty to be introduced if devolution could not be restored.

“We will enter these talks in good heart, in good faith,” she said at Stormont. “We will make every effort to arrive at a conclusion but, in the event that we cannot conclude on what are equality issues for citizens, then be very, very clear that the two government as co-guarantors and signatories of the Good Friday Agreement will have to, at that stage, intervene,” she added.