McDonald says Kelly a signatory to account into which ‘£10,000 was lodged in error’ 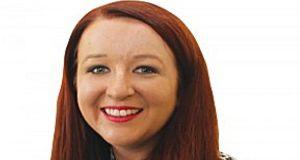 Sinn Féin MLA Catherine Kelly has become the fourth member of the party to resign over a delay in the repayment of mistakenly issued Covid-19 relief cash.

Ms McDonald acknowledge and apologised “once again” for the “clear failure to immediately reimburse public money”.

“Catherine is a signatory to an account into which a small business grant of £10,000 was lodged in error,” the Sinn Féin president said.

“The grant was unsolicited and has been repaid in full. The failure to return the grant immediately is unacceptable. Catherine fully accepts that she did not discharge her duties as a public representative in this regard.”

Ms McDonald said the incorrect lodgement of small business grants into three Sinn Féin accounts had come to the attention of the party leadership over the course of Monday and Tuesday.

“The party’s examination of this matter is now complete,” she said.

“As leader, I once again acknowledge and apologise for the clear failure to immediately reimburse public money.”

In a statement, Ms Kelly apologised “unreservedly” to the party and to the public.

She said the party had “correctly intervened” in relation to “the failure to immediately return money that had incorrectly been paid into a party account in West Tyrone”.

“I have been a signatory to that account for a number of years and as such had a responsibility to ensure it was operated to the highest standard. That did not happen in this case,” Ms Kelly added.

“I believe that as a public representative this is not acceptable and therefore I have tendered my resignation as a member of the Assembly with immediate effect.

“I apologise unreservedly to the party, to those who vote for us, and to the wider public.”

Asked about the matter at the Executive press conference on Thursday, Deputy First Minister Michelle O’Neill said that the decision not to return the Covid-19 relief funds was “wrong” and that it should not have happened.

The DUP is investigating whether a landlord it rents a constituency office from received the Covid relief cash meant for struggling businesses.

If so, this would breach the eligibility requirements for the Small Business Support Grant Scheme.

She said the scheme was designed so that it would not benefit politicians.

The payments were reported on BBC Radio Ulster’s Stephen Nolan Show on Wednesday.

The report said that West Tyrone MLA Maoliosa McHugh’s office was one of the three Sinn Féin accounts which received the payment.

Mr McHugh told the programme that he had contacted party officials to make arrangements to pay the money back “quite a while ago”, adding that he received confirmation earlier this week that it had been repaid.

The Assembly’s Commissioner for Standards has been asked to investigate.

Under the scheme a £10,000 payment was automatically sent to any firm in receipt of Small Business Rate Relief.

The department said 24,700 grants were paid out under the scheme. Of those, 2 per cent (452) may not have been eligible.

It has since recouped 70 of those payments and work is under way to recover all ineligible payments. - PA