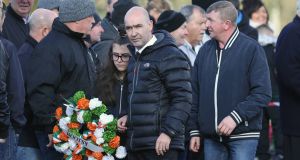 Sinn Féin has defended its decision to attend a ceremony marking the 25th anniversary of the death of Shankill bomber Thomas Begley saying there is a responsibility to attend “respectful commemorations for fallen comrades”.

Ten people, including two children and Begley, were killed and 57 people were injured when a no-warning IRA device exploded in Frizell’s fish shop on Belfast’s Shankill Road on Saturday October 23rd, 1993.

Two IRA members, Begley and Sean Kelly, posing as delivery drivers, had carried the bomb into the busy shop.

Begley died in the blast and Kelly was seriously injured. A getaway driver was never traced.

The IRA said the intended targets were UDA loyalist paramilitaries who they believed were meeting in an office above the shop.

The office was empty at the time.

The 15 minute ceremony at the cemetery’s Republican plot, which is maintained by the National Graves Association, was addressed by Sinn Féin Belfast councillor and former IRA prisoner Séanna Walsh, after a young piper played Amhrán na bhFiann.

Cllr Walsh said the “passing of time does little to ease the pain of all of those who lost ones on the Shankill Road that day”.

He described Begley as a “highly respected and highly regarded Oglach” who had “died tragically on active service”.

“A son who was born into conflict, like all those who now rest in this plot were faced with extraordinary challenges and they responded in defence of their community and country,” he said.

“Everyone has the right to remember their dead in a respectful manner. There can be no hierarchy of victims. Republicans recognise that. The past will always be a contested space. There is no single narrative to any conflict no matter where it happened in the world nor at any time of history.

“The refusal of the British government to accept that basic truth is why they are still blocking the legacy mechanisms of the Stormont House Agreement. They don’t want the world to know what they did in our country.”

Cllr Walsh said there was now “a peaceful political way forward toward the goal of a new Irish democracy which had been opened up by those who gave their lives for Irish freedom”.

He said the aim was for “a reunited nation at peace with itself and the world”.

A minutes silence was observed and then “the Begley family, Sinn Féin, friends and comrades, Ardoyne and Bone Ligoneil Ex-Prisoners and others” were called forward to lay wreathes at the plot.

No senior Sinn Féin elected representatives were in attendance at Milltown Cemetery in west Belfast for Saturday’s commemoration.

The main speaker at the event, also attended by Begley’s father and other family members, was Kelly.

He recalled his friendship and memories of ‘Bootsy’, who he described as a “shy and self conscious young man” and an “eager, determined, committed and cool volunteer”.

Addressing the Shankill bomb Kelly said: “The truth is it was an IRA operation which went tragically wrong, “he said.

“I am truly sorry for the loss of life and the injuries suffered on that day but there is nothing I can say which can bring any comfort to the families of the victims. Let me say, however, that today’s event is one of respectful and dignified commemoration of Bootsy.

“This is no glorification of the events of that awful day. We stand in solidarity with Bootsy’s grieving family and we remember all of those who died during the conflict”.

Speaking to reporters afterwards Cllr Walsh said republican activists were there to “remember the life and the death of a comrade”.

On relatives of Shankill bomb victims and others being upset that the commemoration was taking place at all, Cllr Walsh said republican activists “understood how they felt” and that “there was very little that could be said to help those relatives”.

It has been said by commentators that former Sinn Féin leader Gerry Adams had been obliged to carry Begley’s coffin at his funeral.

Twenty five years on Cllr Walsh said there was a responsibility for Sinn Féin to continue to be involved in commemorations of republicans.