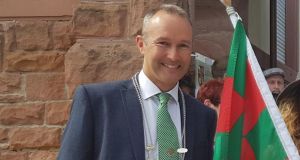 Sinn Féin has suffered a setback in Cork following Cllr Paul Hayes’s announcement that he is to quit the party and sit as an independent.

Sinn Féin has suffered a setback in Cork following Cllr Paul Hayes’s announcement that he is to quit the party and sit as an independent. He was one of only two Sinn Féin councillors on Cork County Council,

Cllr Hayes is a native of Clonakilty in West Cork, Cllr Hayes, held his seat for the party in the 2019 local elections which saw the party’s representation on the council drop dramatically to just two seats after winning ten in 2014.

Speaking to The Irish Times, Cllr Hayes (42) said he had taken the decision to resign from Sinn Féin due to a growing frustration with how the party has been organised locally and the lack of support from Dublin.

Cllr Hayes, a father of three young children who lives in Courtmacsherry and has been a member of the party for 25 years, said: “I’ve been frustrated with the lack of organisation locally for a while now – last year heading into the local elections, we were very haphazard in our approach when it came to selecting candidates for Bandon and Bantry, ” he said.

He said several party members did not come out to canvass in the local elections and it fell to a small number of family and friends to help him hold his seat in a reduced electoral area.

He said he accepted the tide was against Sinn Féin in the local elections but said there was a similar lack of commitment locally facing into this year’s general election despite the party riding high in the national opinion polls.

“The tide was coming in for us and people were reacting well to Mary Lou and momentum was building as evident from the fact candidates who couldn’t get elected in last year’s locals were topping the poll in the general election.

“But I don’t think we got the support we needed from party HQ – Mary Lou came down to Cork to visit the city constituencies and Cork East and then she went to Kerry but she by-passed us here in Cork South West.

“I think it’s important to have the leadership coming into a place – it gives everyone a boost and people think that they believe the candidate is in with a chance so when it doesn’t happen, then it’s very disappointing.”

He also referenced a lack of support when it came to fund-raising which fell to himself to organise, ending up practically footing the bill for posters and leaflets for both local and general elections.

“I had take time off from my job with a coffee distribution firm. I took a month off for the general and three weeks for the local, again at my own expense so it wasn’t sustainable to continue.”

Cllr Hayes said the Irish South and West Fisheries Organisation nominated him for the Seanad but Sinn Féin declined to support him.

Since announcing his decision to resign and sit as an independent on Cork County Council, Cllr Hayes has been approached by several other parties, wishing to recruit him but he’s in no rush to join anyone.

“I’ve been in a party for the last 25 years and I’m not keen to jump into another party structure ... I’m not saying ‘No, nay never’ to others or even to Sinn Féin down the road but something has to change locally.