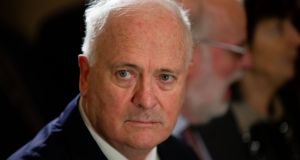 Sinn Féin could have “neutralised” the Democratic Unionist Party’s crucial veto on the outcome of Brexit by taking their seats at Westminster, former taoiseach John Bruton has said.

History shows that abstention from parliament by Irish politicians has “substantial downsides”, he said in a speech in Dublin to mark the centenary of the pivotal 1918 general election, which led to the first Dáil and Irish independence.

Mr Bruton referred to Sinn Féin’s refusal to take their seats at Westminster after the poll.

“The historic precedent shows that when you don’t take your seats, there is always a price to be paid for it. There was a price paid then too,” he told The Irish Times afterwards.

“Most people would argue, perhaps, that it was a price worth paying, but on the other hand there was a price paid because Stormont didn’t come into being until 1920 and there were very little Irish nationalists MPs at the time because of Sinn Féin’s abstention.”

Drawing parallels between the abstention at the time of Sinn Féin’s landslide victory in 1918, and its refusal to take seats at Westminster today, he suggested their role could have been key in the outcome of Brexit.

“I think the DUP veto wouldn’t apply, essentially (if they took their seats),” he said.

“They largely would have neutralised the DUP position.”

But he added that “at this stage I’m not so sure they would make a lot of difference.”

“At this late stage, it might be counter-productive,” he said.

The former Fine Gael politician said that once the Belfast Agreement came into being “the way was clear for Sinn Féin to take their seats, because the Irish people had approved it in an all-Ireland referendum.”

“In a way, the continued abstention by Sinn Féin from taking their seats in Westminster is an indication of a less than whole-hearted acceptance of the Good Friday Agreement in all its parts.”

In his speech, Mr Bruton said it is important to remember that the majority rule Stormont parliament at the time of partition was created by the Government of Ireland Act 1920

It was “thanks to Sinn Féin abstention” that there were virtually no nationalist MPs left “to probe the dangers of this new Stormont parliament”, he said.

“A high price has also been paid for the fact that Sinn Féin, in its manifesto, emphasised its unwillingness to compromise on what it saw as Ireland’s right to self determination based on natural law,” he told the gathering at Wynn’s Hotel in Dublin city.

“The electorate’s support for this ‘no compromise’ approach undoubtedly made life difficult for the treaty negotiators in 1921 and contributed to the Civil War and to much subsequent strife.

“If the Irish (Parliamentary) Party’s approach, of ‘vigorous agitation on rational lines’, had received more electoral support, the treaty negotiators task might have been easier.”

Mr Bruton said as “we cope now with the prospect of the UK leaving the EU Customs Union” it is interesting to note “one of the big differences between Home Rule and the treaty was that the treaty involved the Irish Free State leaving the Anglo Irish Customs Union, whereas, in deference to Ulster, the 1911/14 version of Home Rule would have kept full free trade between the two islands.”

“The mandate of the 1918 election was elevated to unsustainable heights in subsequent debates and that made life difficult afterward,” he said.

“There are some similarities here to the over interpretation, in our neighbouring island of the Brexit mandate of 2016.

“Electoral mandates, however big, do not relieve the politicians who get them of the duty to be realistic about what can actually be achieved afterwards.”