Sinn Féin calls for Border poll on a united Ireland 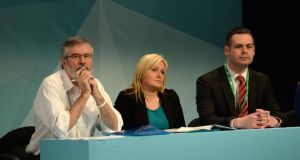 A Border poll on a united Ireland should be held during the life of the next governments in the North and South, Sinn Féin MP for Fermanagh South-Tyrone Michelle Gildernew has urged.

The “creation of a united Ireland is the primary objective of Sinn Féin,” Ms Gildernew told the party’s ardfheis in Derry. “We are working to make that a reality in our time.”

“The demand for an end to partition and the reunification of Ireland is a demand for national democracy. It is the way forward for political progress and lasting peace,” she said. “We need a Border poll.”

She added that it was one of the outstanding issues of the 1998 Belfast Agreement such as an Irish language and a bill of rights for Northern Ireland which the British government “needs to act upon”.

“We are calling in Sinn Féin for an island-wide referendum on Irish unity in the next term of the Assembly and Dáil,” said Ms Gildernew. “We would all be better off with a single economic unit on the island of Ireland rather than two competing economies - one single fully functioning health care system rather than two failing ones, one education system providing our children with the future that they deserve.

“We believe in Irish unity because we believe it would be better for all of the people of Ireland. Decisions about Ireland are best taken by the people who care most about Ireland, republicans, nationalists and unionists across the island.”

North Belfast MLA Gerry Kelly said Sinn Féin was preparing for a united Ireland. “We are already in power in the Assembly in the North and we are the main opposition and the only credible alternative to the present failed Government in the South,” he said.

“Irish politics is undergoing its biggest shakeup since partition and we are the fore of that change,” added Mr Kelly.

Sinn Féin, he said, wanted a referendum that involved “informed, reasoned and respectful dialogue” where people of “all shades of opinion” could have a “say in our future”.