After handing out the fruits of her tour rider (juice, peanut butter and honey) to fans at the Academy on Middle Abbey Street in Dublin, the singer Amanda Palmer led a crowd to Liffey Street, outside the Grand Social venue yesterday afternoon, for an impromptu concert announced on Twitter just hours previously. 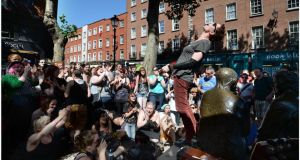 There’s a reason Palmer is lauded by everyone from industry experts to kids in the ‘burbs as an example of how an artist should connect with their fans. She reacts instantly to events as her brilliant riposte to the Daily Mail this week showed. It ran a story about her breasts, and she responded by composing a hilarious waltz slating the newspaper’s misogyny.

Beginning with Map Of Tasmania, a song written with The Young Punx and Peaches, she followed it with In My Mind, and a cover of The Clash’s Should I Stay Or Should I Go during which she encouraged everyone to mosh responsibly.


Fundamentalists
Mindful that the gig happened to be taking place under the Dublin Well Woman Centre, she sang Oasis, a song about a girl who is raped and then faces down Christian fundamentalists at an abortion clinic.

As the crowd applauded both Palmer, and the Well Woman Centre, she wound up with Radiohead’s Creep, all performed on ukulele.

Among those who flocked to the site was Niamh Gaskin from Dundalk who said: “I really love that she does gigs like this where she just tells you about it on Twitter,” she said. “She’s just really kind to do things like this for free.”

Palmer in turn was enthused by the reception. “Look at these people, they’re game for anything,” she said.

“I’ve never had a bad show in Dublin, the audience is always really insanely enthusiastic.

“Whatever it is about their relationship with music they know how to be a good audience.”