‘She continues to inspire me’, says Caitríona Lucas’s husband 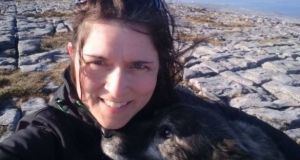 Caitríona Lucas (41) was an active and highly qualified member of one of the busiest Irish Coast Guard units in the country at Doolin, Co Clare

The husband of Caitríona Lucas, the Coast Guard volunteer who died in a tragic accident on September 12th, says she will be remembered for her complete commitment to everything she did.

“She continues to inspire me, her memory sustains us,” he said.

“We’re broken, absolutely in bits, but her memory and the support of our friends and neighbours and community will get us through,” Bernard Lucas told RTE’s Today with Sean O’Rourke show on Tuesday.

Mr Lucas said joined the Coast Guard in 2002 and Caitríona joined in 2004: “It was a natural progression, we both loved the outdoors, boats, water, climbing, helping people, if you can help people and give something back to your community.”

The couple met when Caitríona was 17 and would have been together 24 years last weekend.

“Any time the pager went Caitríona was the first to volunteer. She worked in library services and worked her roster around that,” said Mr Lucas.

“She loved it, it’s about giving back to the community - you have to see the sadness in someone’s eyes if you cannot find a loved one for them. When you see that you will do anything to help them. You can’t find everyone, but you give 110 per cent to try.

“If you can find someone and bring them back, either alive or return a loved one’s body to a grieving family, that’s what it’s all about,” he said.

Mr Lucas said Caitríona built up a great range of qualifications over the years, including climbing instruction and suicide prevention.

“It was a huge commitment, she did 700 hours a year - she ran the Facebook page and website, school visits, an awful lot of time when on behind the scenes,” he said.

He said the couple’s children Ben and Emma were her pride and joy: “It was heartbreaking for them, but they’re good, they have great support from friends and neighbours.

“Emma is back at school studying for her Leaving Cert - she is doing engineering and her project is on the Coast Guard helicopter. She’s very proud about that. Ben is an aircraft engineer in Shannon, he’s back at work.”

He said:“We had the kids young, she was more than my wife, she was my best friend. We grew up together in a small rural community.

“We met young, we had the kids young, now was supposed to be our time.”

He recalled that on the day of the accident he had been paged and was told that there was an upturned boat in Kilkee. He went to Doolin at first and when he got ashore on the pier in Kilkee Gardai told him that there had been an accident and that Caitríona was involved.

“I flew with her in the helicopter to the hospital. I wasn’t aware that it was going to be that extreme. I found myself asking all sorts of questions but until this is fully investigated I still won’t have answers,” he said, adding he did not know how long how will it take.

“Caitríona loved this life, I love it. It’s what we do. It’s what I still do. There’s nothing better you can do, to help the community, to give something back.”

He has been back at work with the coast guard.

“I’ve been on three missions, one with a helicopter, that was tough,” he said.

“I really had to push myself to put the casualty on the stretcher into the helicopter, as the last person I had brought into a helicopter was Caitríona.”

Mr Lucas said the description at her funeral of Caitríona as a playful creative spirit, was perfect.

He said: “She loved nature, walking, being outdoors. She trained rescue dogs.

“Anything she wanted to tackle she did, if she made her mind up to do something, it was done 110 per cent. She set up Lego clubs in libraries, set up arts and crafts projects.”

He said he was pleased that one of her paintings - of the coast guard boat in Doolin - is now being considered by An Post as a stamp following an online petition. “She was a very talented artist.”

When asked was there anything she failed at, he said “no”.