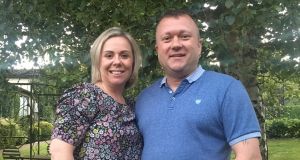 Antoinette and Eddie Costelloe pictured after after their €500,000 win in the EuroMillions Plus draw on Friday night. Photograph: Press 22

A Limerick taxi driver who won half a million euro in Friday night’s EuroMillions Plus draw said he feels “on top of the world”.

Eddie Costelloe, from Moyross, welled up as he recalled telling his mother Helen, before she died in 2013, that one day he would win the lottery.

Mr Costelloe (43) said: “On my mother’s deathbed, I said to her ‘Mam, I’m going to win the lotto one of these days’, and she said ‘son, you will’, and I’ve been chasing this for a long time.”

The father of two added: “Seven years it took me, and I got it. I’m after getting half a million.”

He described the win as “life-changing” for himself and his wife, Antoinette, and their two children, Cian (5) and Megan (9).

On Friday, he decided to do a EuroMillions Quick Pick at his local Circle K filling station, in Thomondgate, after a long day at work transporting parcels for delivery firm Nightline, a position he took up after his work as a taxi driver dried up during the coronavirus lockdown.

“I’m top of the world, top of the world. We are sorted for life. I’m going to rent out my taxi because I don’t want to be listening to drunk people anymore — I’m finished, I’m done,” he said.

Despite the massive cash boost, Eddie and Antoinette, who is a care worker, will continue working.

“It’s not going to (stop) me from working, because it’s not in me to sit around, I’ll always work,” Mr Costelloe said.

However, the couple, who have been together for 12 years, and married for the past three years, will be travelling in style to work from now on as he plans on purchasing “a new van”, and she “is going to pick her new car, whatever she wants”.

“We’ll buy our house, and a nice holiday home in Lanzarote,” Mr Costelloe added. The Liverpool fan is also considering becoming a season ticket holder at the title-winning club.