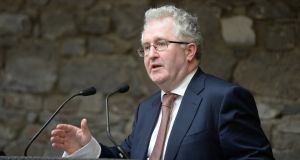 A second meeting between retired chief justice Susan Denham and Supreme Court judge Séamus Woulfe took place within the last week about her impending report into his attendance at the Oireachtas Golf Society dinner, it is understood.

A sense of expectation is mounting in legal circles about the much-anticipated report.

One of the issues being actively discussed is whether or not the report will be published, with sources pointing out that publication of what is a non-statutory review could, if aspects of the review are deemed unfavourable, potentially expose its author and/or others to legal action and associated costs if any such action is successful.

Ms Denham was asked by the Supreme Court itself to carry out the review and it does not have the status of a report of the Courts Service.

That means that if the report is published, and legal action is initiated, issues arise about who would be the respondent to any such proceedings, and whether the respondent would be indemnified and by whom.

It is believed a draft or drafts has been circulated to those involved.

That would accord with the usual procedures concerning such documents in that those involved are presented with a draft document and invited to make any comments or submissions before the document is finalised. Such a practice is aimed at ensuring adherence to principles of fair procedures and natural and constitutional justice.

Senior sources expect developments in the matter this week for reasons including that the new law term formally opens next week when Mr Justice Woulfe, who was appointed to the court last July, is listed to sit next week for the first time as a Supreme Court judge.

The judge retained lawyers in the wake of Ms Denham being asked to carry out the review and was accompanied by Michael Collins SC to an earlier meeting with Ms Denham.

Attended by more than 80 people, the golf dinner went ahead on August 19th despite Covid-19 public health guidelines placing limits on indoor gatherings.

Mr Justice Woulfe apologised for his attendance in a statement issued in August.

It is believed Ms Denham’s review of his attendance has been framed by international guidelines on judicial conduct due to the absence of defined Irish rules on how judges should behave because the Judicial Council Act has yet to be fully commenced.

The judicial conduct committee, created in July, has 12 months to set guidelines.

The Act defines judicial misconduct as behaviour that departs from acknowledged standards of conduct requiring judges to uphold and exemplify judicial independence, integrity and propriety, or conduct that brings the administration of justice into disrepute.