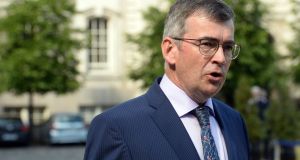 Senior gardaí have broadly welcomed the selection of Drew Harris as the next Garda Commissioner with members of the force hoping that he will press for more resources to allow An Garda Síochána to provide a full policing service.

The Irish Times spoke to a number of senior officers on an anonymous basis and none made any issue of the fact that Mr Harris, the PSNI Deputy Chief Constable, is the first non-member of An Garda Síochána to lead the force in more than 50 years. Some welcomed the recruitment of an outsider.

One officer said he believed Mr Harris faces serious challenges but would prove a success with Garda management and rank and file if he confronts the issue of resources and presses for additional budgets.

“I know people who worked with Drew Harris in the North and he’s a pretty straight talker. We haven’t been honest with government in recent years and nobody at senior level as told them either through the Public Accounts Committee or the Policing Authority that we need more resources,” the officer said.

“Our resources have been cut by up to 25 per cent and we are still expected to provide the same level of service and that’s just not possible so I’m hoping he will put it fairly and squarely to Government...”

The officer said he hoped Mr Harris would secure additional funding as he did not want to see the Garda following the model of policing in the UK, where many forces prioritise certain crimes and do not investigate more minor complaints from the public.

Another senior officer said he had no issue with Mr Harris being appointed from outside the force’s ranks and welcomed the fact that he was an experienced police officer. The garda reckoned there would be far greater cause for concern if a civilian had been chosen for the job.

“Personally, I’m delighted he’s a police officer. I know he’s an outsider but he’s a very experienced officer who has dealt with murder investigations, bombings, sectarianism and I think people will respect that and he’s gone through a very rigours interview process so that will all stand to him.”

The officer expressed concern about a report in Wednesday’s Irish Times which said that Mr Harris would likely bring in his own team of top officers.

“If that’s true and he brings in his own people without them going through the selection process that exists, that won’t go down well within the organisation or with the various Garda associations,” the officer added.

Another senior officer said he hoped Mr Harris would push for greater civilianisation of the force to free up officers currently tied up in administration to get more involved in policing duties. He also expressed hope that it might compel the Government to address issues regarding State security.

“He’s a man of great wisdom and humility and resilience... So it’s our loss, certainly, at one level but it bodes well for strategic co-operation in the future between the two organisations,” he said.