Discharged bankrupt billionaire understood to be on €500,000 salary as adviser to group 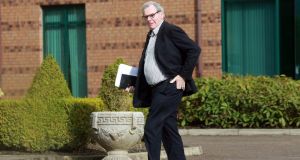 Seán Quinn pictured recently outside his office: he is a senior adviser to Quinn Industrial Holdings Limited. Photograph: John McVitty

Discharged bankrupt businessman Sean Quinn has been accused of trying to “drive a wedge” between the members of the management team now in charge of his former businesses in Cavan and Fermanagh.

The charge is made in a March 14th email from the three US hedge funds who bought the companies in 2014, which are known collectively as Quinn Industrial Holdings Limited.

In the email, the US investors reveal the battle for power that now exists between them and Mr Quinn, who is determined to regain control of his former business empire.

At that meeting, Mr Barrett said: “Sean has grown increasingly uncomfortable” as an adviser and “has a strong desire to acquire ownership in Quinn Industrial Holdings Limited.”

The former billionaire was brought in as a senior adviser to the new operation last year on a salary, The Irish Times understands, of €500,000 a year, but he was not given an executive role.

However, the investors said they believed that they had “the right leaders in place” to deliver a successful outcome for all shareholders in the company, including the local management.

“In light of this, we made it clear to Ronan that the actions Sean has taken to drive a wedge between the senior management team are completely unacceptable to the investor group,” the email said.

Mr Quinn must “rectify his relationship” with local management and “take an active approach, demonstrable over a period of time, against the increasingly negative activity in the community” if he is “to become bankable in the finance community again”.

The email went on: “The recent developments have done nothing but move Sean further away from his goal, and, while obviously not positive for the business, are downright detrimental to Sean.

“Assuming Sean addresses our initial concerns on an ongoing basis and our business enjoys a reasonable period of stability and continued success, we are open to further discussions on Sean’s role, but at this point in time, the Investor Group has no appetite for Sean’s role expanding beyond the advisory relationship already in place.”

The US hedge funds said they were “growing increasingly uncomfortable with the escalating acts of violence and intimidation in the Derrylin-Ballyconnell community, which whether directed at our business, or neighbour businesses, adversely impact our willingness to continue to invest and grow Quinn Industrial Holdings Limited.

“Unfounded public allegations and subversive meetings are unproductive and inconsistent with the culture we hope to promote.”

“When we initially agreed to support [Quinn Business Retention Company] QBRC in their bid to buy the Quinn Industrial Holdings Limited businesses, QBRC explained to us that their goals were to retain local employment and ensure local management of the Quinn Industrial Holdings Limited businesses,” the hedge funds said in the email.

“The investor group has delivered on both promises. The businesses are under local management, and we have grown employment by 12 per cent (100 jobs) and increased wages substantially in our first 12 months of ownership.

“While we enjoyed a period of relative calm in the community after closing the acquisition in December 2014, we have now been bombarded with continuous disruptions around our cement plant, threats to area businesses, false personal attacks and vandalism of our equipment.

“None of this activity is acceptable or productive, and the Investor Group will in no way be intimidated by these actions.”

Brigade Capital, Silver Point Capital and Contrarian Capital declined to comment. Questions were also put to Mr Quinn, but no reply has been received by The Irish Times.

Quinn Industrial Holdings Limited said the existing difficulties “will not distract us from our drive to ensure that the company continues the strong growth which we have demonstrated in the first year”.

Local management had been appointed in order to retain local employment and influence in the area.

“Sean has his own adviser whom we understand is in direct discussions with the investors in relation to his role within the business. Any decision relating to the outcome of those discussions is exclusively a matter for the US Investors,” said the company spokesman.