Seán Lemass tapes: the split in Sinn Féin and setting up of Fianna Fáil 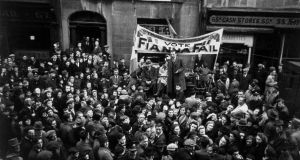 A victorious Fianna Fáil party in 1932 feared they would be subject to an army coup led by a man allegedly responsible for some of the worst atrocities of the Civil War, Seán Lemass believed.

The party won 72 seats – five seats short of a majority – in the February 1932 general election, supplanting, with the support of the Labour Party, the Cumann na nGaedheal government, which had held power for 10 years.

1 Wife not entitled to deceased husband's entire estate, High Court rules
2 Coronavirus: From midnight Dublin will move to level three until October 10th - Taoiseach
3 Life in Level 3: What will happen under new restrictions in Dublin?
4 President Higgins says British must face up to their history of reprisals
5 Stephen Donnelly dodges the questions as Matt Cooper mercilessly pursues the answers
6 Blanchardstown-Mulhuddart has worst Covid-19 rate in country
7 ‘We are shell shocked’: Dublin restaurants angry over indoor dining ban
8 Covid-19: Garda presence in Dublin to be significantly increased
9 Gardaí investigating after woman throws smoothie over Leo Varadkar
10 English ‘chumocracy’: Boozy weekends and class disdain with the Camerons
11 Rest of country can ‘transit’ through Dublin for overseas travel
12 Covid-19 is spreading most in deprived areas, the figures suggest
13 Michael McDowell tells Seanad he has ‘no confidence’ in NPHET
14 Golf group insist they adhered to public health guidelines during Tullamore trip
15 Cluster among golfing group in Midlands a 'significant Covid-19 incident'
16 Diarmaid Ferriter: Those in Downing Street have no regard for the North or the DUP
17 Aldi empire wracked by family feud
18 Coronavirus: 253 more cases and three further deaths reported in State
19 Raab’s US visit amplifies Democratic support for Irish
20 NatWest considers closing Ulster Bank in the Republic
21 Coronavirus is out there, seeding widely, and things will get worse
22 Teenager who stabbed 18-year-old in a Dublin park found guilty of manslaughter
23 Sam Bennett signals final intention of winning green in Paris
24 Hilary Fannin: I console myself with a new pair of knickers
25 Dublin restrictions will lead to ‘economic meltdown’ in hospitality sector – RAI
26 Thousands of third level students in Dublin to have limited access to college campuses
27 HSE turns down request from Britain to process tests in Irish laboratories
28 Coronavirus: Indoor dining, weddings, funerals, travel to be hit as Dublin set for Level 3
29 Cliff Taylor: What permanently low interest rates mean for you as a saver or borrower
30 Living with Covid plan: What is in each of the five levels?
31 ‘It will be hard for people . . . they’ll miss it’: Dublin’s religious once again close their doors
32 Leo Cullen says ‘fresh energy’ behind big Leinster selection calls
33 Poll puts Democrats ahead in some key races for Senate seats
34 We pictured idyllic summers, colour schemes, playrooms for the kids. Then we saw the house
35 Liverpool close to agreeing deal to sign Wolves forward Diogo Jota
36 The Irish Times view on Dublin’s lockdown: What’s the plan to get to Level 1?
37 Pat Smullen was as a ‘fighter’ who always did his best, funeral service told
38 ‘I felt like I was just an incubator for Tusla’
39 Coronavirus: NPHET letter to Government warns of ‘extremely critical juncture’ for Dublin
40 Fiona Bruce in a Spitfire is a Brexiteer’s fever dream
Real news has value SUBSCRIBE