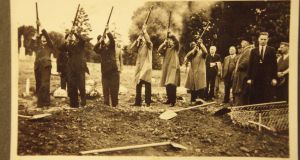 Members of the old IRA fire volleys at the funeral, in September 1938, of Edward Keegan, an Irish Volunteer who was dismissed from the advertising department of ‘The Irish Times’ for going to fight in the Easter Rising. The paper has bought his 1916 medal to put on permanent display in the foyer. Photograph courtesy of his granddaughter Joan Pinhorn

The IRA, which carried out a series of bombing attacks in England before the opening of the second World War, had been infiltrated by “ultra-conservative sections of the British secret service”, Seán Lemass believed.

Lemass accused the IRA of scuppering attempts by the Irish government to open a line of dialogue with the Stormont government over the issue of partition.

6 Stuff happens: Why you have so much household clutter – and how to get rid of it

7 Fintan O’Toole: The Covid-19 pandemic should be the last hurrah for Irish stoicism

10 Laura Whitmore: ‘I’ve had enough of being trivialised and gossiped about’

12 The first eight days: how the coronavirus pandemic struck Ireland

13 David McWilliams: This St Patrick’s Day, Ireland should do a vaccine deal with the US

14 Award to woman knocked down crossing Dublin street increased to €372,000

15 EU seeks to access AstraZeneca vaccines produced in US

18 Ross O’Carroll-Kelly: ‘We’d be a lot better off if we’d remained port of Britain’

19 Murmuration of starlings: How our stunning front-page photograph was taken

21 Colin Farrell: ‘After 20 years of drinking the way I drank, the sober world is pretty scary’

23 Can Davy’s clients stay silent as board goes into conclave?

32 Meal Box Review: There’s a touch of magic to this food

38 Father of the Cyborgs: The Irish neurologist who hacked his own brain