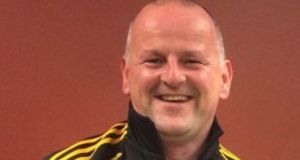 Sean Cox (54), a former company director from Dunboyne, Co Meath, suffered major head trauma when he was struck in a random assault outside Anfield in April 2018.

Seán Cox, the Irish Liverpool FC fan who suffered severe brain injuries in an unprovoked attack last year, is being moved to England for further specialist treatment, his family has announced.

Previously Mr Cox was receiving care in the National Rehabilitation Hospital in Dun Laoghaire, Co Dublin. On Thursday, his family announced he would be moving to a specialist neurological facility in northern England, for an initial 12-week rehabilitation programme, to work on his speech and movement.

Mr Cox (54), a former company director from Dunboyne, Co Meath, suffered major head trauma when he was struck in a random assault by a masked Roma supporter outside Anfield in April 2018, ahead of a Champions League match.

In February, Simone Mastrelli (30) was jailed for three and half years after pleading guilty at Preston Crown Court to unlawfully and maliciously inflicting grievous bodily harm.

In a statement on Thursday, his wife Martina Cox provided an update on his condition.

“Seán has made progress over the past eighteen months but it is extremely slow. He finds it very difficult to express himself verbally and, while it seems he can hear and understand more, his speech remains very challenged. It is unlikely that he ever will walk again, which is difficult to accept for someone as active as Seán used to be,” she said.

“On the positive side, he remains an avid sports fan and is always in a great mood when watching Dublin GAA or Liverpool on the television,” Ms Cox said.

The family intend to visit Anfield for a Liverpool FC game next month, as guests of the club’s chief executive Peter Moore, his wife said.

Earlier this year, a charity match for Mr Cox was held in the Aviva Stadium, between an LFC Legends side and a Republic of Ireland XI. The game raised €748,000 for the Seán Cox Rehabilitation Trust, which will fund his specialist treatment in England.

“We are about to start a renovation of our house in Dunboyne, which will hopefully be finished by Christmas, making it wheelchair accessible and installing specialist equipment, which will mean Seán can spend time in the family home rather than continually being in a hospital environment,” Ms Cox said.

“Being able to bring Seán to England for rehabilitation and, in time, having him spend more time in our adapted home is all privately funded, and has been made possible by the generosity of so many people and organisations who took Seán into their hearts. The Cox family remain hugely grateful on Seán’s behalf for the ongoing show of support,” she said.

The Support Seán campaign has announced comedian John Bishop will host a show in the Three Arena next January, to raise funds for Mr Cox’s care.