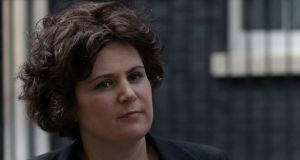 The SDLP’s Claire Hanna speaks to the media outside 10 Downing Street in London on June 15th, 2017, after holding talks with with UK prime minister Theresa May. Photograph: Daniel Leal-Olivas/AFP/Getty

One of the SDLP’s most high profile members has resigned the party whip in protest at its partnership with Fianna Fail.

Claire Hanna is also quitting as the party’s Brexit spokeswoman.

The South Belfast Assembly member will remain a member of the SDLP.

Ms Hanna, who has enjoyed a rapid ascent through the party ranks and was seen by many as a potential future leader, said she believes the alignment with a traditionally conservative party is inconsistent with the SDLP’s social democratic principles.

The Fianna Fáil link-up was endorsed by more than two thirds of SDLP members who attended a special party conference in Newry, Co Down on Saturday.

Ms Hanna supported a defeated motion that opposed the exclusive relationship with Fianna Fáil and instead advocated a broader approach to political collaboration south of the Border, incorporating other parties such as Fine Gael and Labour.

Reacting to Ms Hanna’s decision, party leader Colum Eastwood said: “At the SDLP special conference all members were afforded the opportunity to speak and delegates to vote on two motions.

“The SDLP membership overwhelmingly voted for the party to embark on a partnership with Fianna Fáil.

“It is with regret that we accept Claire’s resignation.

“The party membership has democratically spoken and, difficult though that decision may be for some, their wishes must be respected and enacted.”

On Saturday, Mr Eastwood hailed the birth of a policy partnership he said would build for a better future in the years ahead.

Within 24 hours, the chairs of the SDLP’s youth, women and LGBT+ wings said they were stepping down in an open letter that was sharply critical of how the decision was reached.

Matthew Corr (youth), Caoimhe McNeill (women) and Matthew Carson (LGBT+) wrote: “Calls for respect and party unity ring hollow when a coach and horses has been driven through the proper procedure which exists to facilitate a debate, on equal terms, and allow the party to come together after.”

They claimed Saturday’s conference was called without proper notice being given.

“Voting opened while the debate was ongoing, allowing people to vote before they had heard all points of view,” the letter said.

“This was extremely discourteous to speakers of every side.

“There can be no reasonable debate when the terms of the debate are arbitrary and extra-constitutional.” – PA