Up to 1,000 people march in Ferbane seeking reversal of decision to shut town’s last bank branch 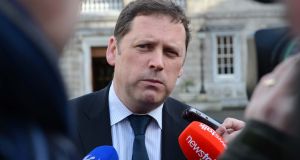 Fianna Fáil TD Barry Cowen said Ulster Bank was going back on a pledge not to close a bank where no other bank was available. Photograph: Eric Luke/The Irish Times

Up to 1,000 people from west Offaly have marched through the town of Ferbane in protest at the planned closure of the town’s last bank branch.

Ulster Bank has said it plans to close its branch in Ferbane, one of 14 such branches it is planning in the Republic next year.

At the march in Ferbane a coffin bearing the words “West Offaly Rip” was carried from a sports field outside town, by six pall bearers who placed it on the steps of the Ulster Bank in the town’s main street. The pall bearers were followed by a lone piper, children from local schools, traders, residents’ associations and members of local sporting groups and the IFA. Shops and businesses closed for the duration of the march and subsequent rally.

Speaking at the rally local businessman Pat O’Callaghan said there was “shock and devastation” in the town and people would not transfer their accounts to branches in Tullamore or Athlone.

Banking facilities were to rural Ireland like roads and broadband; they were essential to survival of small towns, he said.

Diarmuid Guinan of the Brosna Press asked if the people of rural Ireland were being told “to pack up and move to urban centres”. He said the point of the march was not purely a protest, but a demonstration of strength designed to get a reversal of the decision to close the branch.

Brian Flynn said the march and rally was not the end “only the beginning” and pledged to take the protests to Dublin and the Belfast headquarters of Ulster Bank parent the Royal Bank of Scotland, if necessary.

John Keena chairman of County Offaly IFA said he personally had been a loyal customer of Ulster Bank as had his parents and his wife’s parents. He said it was time for some loyalty in return. Mr Keena said he had the support of IFA chairman Eddie Downey in calling for an urgent meeting with chief executive of Ulster Bank, Jim Browne.

TDs Barry Cowen (FF) and Marcella Corcoran (FG) Kennedy said Mr Browne had not responded positively to attempts to set up a meeting.

Ms Corcoran Kennedy said the bank had refused to meet her and those with accounts in the branch had learned of the proposed closure through the national news media.

Mr Cowen said Mr Browne and the bank had “four times gone back on their word” in promising the bank would remain open and then announcing its closure.

An Ulster Bank spokeswoman said banking had changed significantly over the last few years and “more of our customers are using digital technology to bank with us where and when it is convenient for them”.

She said closing a branch was never an easy decision and was made “on a case-by-case basis, based on local information and we continue to invest in a range of channels to respond to how our customers prefer to do their banking”.