Rural Ireland only got ‘a bob here and there’ in budget, Tóibín tells Dáil 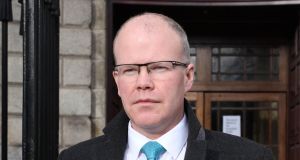 Peadar Tóibín: “What we got is a few bob here and there for rural schemes, rural schemes that amount to nothing more than social welfare for rural Ireland, enough to survive but never enough for a vibrant regional balance.” File photograph: Collins

A “circuit breaker” is needed to deal with Ireland’s lopsided regional development but rural Ireland only got “a few bob here and there” in the budget, Aontú TD Peadar Tóibín has said.

He also criticised a failure to provide a mechanism for seamless North-South co-operation, a need, he said, highlighted by Brexit and Covid-19.

“Resistance to all-Ireland co-operation costs lives. Planning together, funding together and delivering together is the key. Yet there is no mechanism to do this in the budget.”

Mr Tóibín said “we need a circuit breaker to the lopsided city state development of our island”.

Opening the budget debate for the Independent TDs, he said: “What we got is a few bob here and there for rural schemes, rural schemes that amount to nothing more than social welfare for rural Ireland, enough to survive but never enough for a vibrant regional balance.”

Independent TD Denis Naughten claimed there was no new provision for funding under the national broadband plan. “The spending announced today is spending I secured as minister for communications a number of years ago,” he said.

The Government has allocated €132 million to provide high-speed broadband to thousands of homes.

The Roscommon-Galway TD said “there is no indication of any fast-tracking of the national broadband plan to isolated rural homes as had been promised in the programme for government”.

He described budget expenditure as the equivalent of €3,600 for every man, woman and child in Ireland but “I don’t get the impression that this money is being spent any differently than in the budget of last year or the year before”.

Mr Naughten said an inter-departmental commission was looking at “hot desking” of vacant desks in public buildings across the country for civil servants who are commuting into Dublin but there had been no movement on that 12 months later.

Independent Wexford TD Verona Murphy said “throwing money at the HSE over many years does not seem to be resolving our fundamental capacity issues”. She said “we wasted millions of euro renting private hospital capacity rather than using the money to bring the public hospital capacity up to scratch”.

She said it had been an issue for years and every budget day “we hear headline figures of so many billions more for the HSE” but it did not seem to resolving capacity issues.

Ms Murphy also criticised the Government’s approach to dealing with the virus. She said closing large sectors of the economy “every few weeks is unsustainable and has impacted particularly heavily on the hospitality and tourism sector”.

The VAT reduction will not benefit a hospitality sector that is currently closed, she added.

Independent TD Michael Collins said it was a “budget for Dublin 4” as people in rural areas would be particularly hit by the increased car tax and VRT. “That hit is specifically to the people of rural Ireland,” he claimed.