Sound and Vision Fund backs Rebellion: Two States, to be set during War of Independence 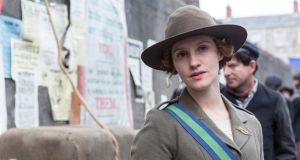 RTÉ is to make a follow-up to its Easter Rising-themed TV drama Rebellion (above). File photograph: RTÉ

RTÉ is to make a follow-up to its Easter Rising-themed TV drama Rebellion.

Rebellion: Two States will be set in the War of Independence, and the drama is to be based around the parallel states that then existed - the official British state and the shadow one created as a result of the abstentionist Dáil.

Details of the drama were revealed in the latest round of the Broadcasting Authority of Ireland (BAI) Sound and Vision Fund.

The production received €200,000 from the fund, which equates to a maximum of 5 per cent of the production costs. That suggests Rebellion: Two States will cost at least €4 million to make.

Zodiac Media, the production company that made Rebellion, will also be involved in Rebellion: Two States.

Rebellion received mixed reviews from critics and the public when it was broadcast earlier this year.

In March the then head of RTÉ Television, Glen Killane, acknowledged there had been criticisms of it, but it had been a “worthwhile exercise in engaging people in Irish history. There is a huge appetite for people wanting to learn more.”

Mr Killane said that from a drama standpoint, “there were things we could have improved on. No piece of television is ever perfect and there are always things that can improve. We have this motto of constant improvement, constantly striving to do things better.”

The total cost of the drama and its transmission dates have yet to be announced. RTÉ said it will not be commenting on the new drama at this stage.

The BAI has also agreed to fund a follow-up to The Guarantee, a drama about the bank guarantee which was broadcast on TV3 two years ago.

The Bailout has received €340,000 from the fund, two-thirds of its proposed costs.

The drama is being made by John Kelleher Media, a production company set up by the former film censor John Kelleher.

His latest film is about the bailout of the Irish banks, after which Ireland lost its economic sovereignty. It is a film adaptation of the stage play Bailed Out! by playwright and journalist Colin Murphy, which premiered at the Dublin Theatre Festival.

Element Pictures has received €200,000 to make a feature-length film for television entitled The Gee Gees, a drama set in the racing world and written by novelist Kevin Barry.

TG4 has received almost €300,000 to make a documentary on the notorious Maamtrasna murders of 1882, in which a family of five were slaughtered and a serious miscarriage of justice occurred.

RTÉ 2 is making a documentary on the journeys of three young people as they transition from one gender to another.

Midas Productions has received €130,000 to make 700 Million Light Years from Birr about the astronomer William Parsons, who once had what was the largest telescope in the world in his back garden in Birr Castle.

A total of €5.835 million has been allocated to 124 projects, of which 90 are radio protects and 34 are TV projects under the present round.

The Sound and Vision Fund is financed by a 7 per cent cut of the television licence fee.