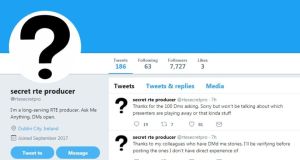 @rtesecretpro: the tweeter claims to be an RTÉ producer who has worked primarily in children’s, daytime, lifestyle and entertainment television

RTÉ has said it will to “hold to account” the anonymous Twitter user who has been severely criticising the broadcaster’s culture and practices.

The social-media account @rtesecretpro first appeared on Twitter on September 7th, since when it has been denouncing RTÉ’s workplace customs and prompting ongoing speculation about its creator. The account’s tweets include excoriations of “lazy” commissioning editors, the grip of unions, morale and even the poor standards of the canteen.

It has gained more than 15,500 followers since first going live.

On Saturday, the account continued to tweet, claiming the State broadcaster was considering hiring a private investigator “to find out who I am”.

The person behind the account added: “So I have been busy, there is second account with 500 tweets written, ready to send. If I lose access to this account. All I want to do is show the things that need to change to save a broadcaster that is vital for Ireland. Profound disloyalty is staying quiet. I’m disgusted.”

1/ RTE are considering hiring a PI to find out who I am. Consider that. The national broadcaster, using licence fee money, to track a

Yesterday a strongly worded circular to RTÉ staff from the broadcaster’s director of human resources, Eimear Cusack, reminded employees that they were bound to observe a code of conduct and social-media guidelines. “Individuals involved in this handle, directly or indirectly, will be held to account,” the email said.

Noting employees were concerned about the tweets, Ms Cusack said the broadcaster deplored the content and intention of the Twitter account. “It is profoundly disloyal to staff, brings the organisation into disrepute, and in a public forum, is a disservice to all of us,” she said.

The Twitter account introduced its author as an RTÉ producer who has worked primarily in children’s, daytime, lifestyle and entertainment television. In diatribes evoking Howard Beale’s rants in the 1976 film Network, the author explains why, in their view, morale and standards have hit bottom. “Everything shot in RTÉ looks like it’s stuck in the ’70s,” one tweets says. “Work practices are implemented not for safety or staff protection, but to discourage innovation.”

The author claims that the broadcaster’s “genre” heads are the same people as held the posts 10 years ago and that since the 2008 crash there have been virtually no promotions. “Everyone frustrated and pissed off, and fundamentally not arsed.”

The tweets come at a time when the national broadcaster is struggling financially in the midst of severe disruption to the media industry, and seeking a number of redundancies.

“The vast majority of people in here, think what they are doing, is pointless,” another tweet claims.

The account also portrays a culture of continual coffee breaks, staff who would rather read magazines than focus on programme rehearsals, and efforts by human resources to find a way to make certain employees take the organisation’s redundancy package.