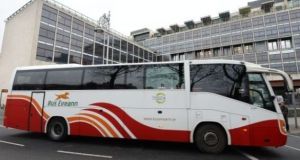 Strike action at Bus Éireann brought services to a standstill for three weeks in March and April.

Minister for Transport Shane Ross said Bus Éireann can be built into a successful and sustainable business after unions agreed to pay cuts and reforms.

Staff in Bus Éireann represented by the National Bus and Rail Union (NBRU) voted to accept Labour Court recommendations which include 10 per cent pay cuts for anyone on €60,000 or more and the closure of a maintenance garage in Dundalk.

This decision ends the dispute which brought services at the State-owned transport company to a standstill for three weeks in March and April.

Workers at the company who are represented by Siptu and the Unite trade unions have already accepted the Labour Court recommendation.

The 17-page Labour Court recommendation included proposals for cuts of 10 per cent to earnings over €60,000, freezes on increments, and the closure of Dundalk maintenance garage.

Bus Éireann staff represented by the NBRU voted 67 per cent in favour of the recommendations.

Bus Éireann had warned it would face insolvency unless remedial actions are taken.

Mr Ross said: “I am pleased that all trade unions have voted to accept the recommendation and that management and employees can now move on with building a successful and sustainable future for Bus Eireann. ”

The Minister said the deal showed that disputes, no matter how intractable they appear, can be resolved by responsible parties.

Mr Ross also repeated his assurances that he would set up a system for management, unions and government officials to hold talks on the future of public transport.

But he added: “The acceptance of the Labour Court is just the beginning of the process to repair a company that has been damaged by Government policy, the protection of the earning capacity of our members remains paramount.”

Mr O’Leary called on the Minister to act on promises for the transport forum.

“It has long since past time that those faceless administrators in the Department of Transport and the National Transport Authority were brought centre stage and stop hiding behind the plethora of public consultations being bandied about like snuff at a wake,” he said.

Meanwhile another potential row in the transport sector is also in the offing with unions representing staff at Iarnród Éireann due to attend a Labour Court hearing on Wednesday on a pay claim by staff.

Workers have sought a pay rise totalling 21 per cent over time, or at the very least, a deal equivalent to increases secured in recent disputes at the Luas and Dublin Bus of around 3.75 per cent per year.