Roses bloom at RTÉ with tales of hope and ambition

A few of the Roses share their stories ahead of the Rose of Tralee International Festival taking place in Co Kerry August 17th to 23rd. 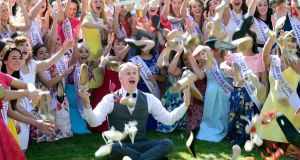 Dáithí Ó Sé with Rose of Tralee contestants at RTÉ for the launch of the festival which runs from August 17th to 23rd. Photograph: Cyril Byrne/The Irish Times

It felt like the height of summer on the lawns outside RTÉ. Under a rare, cloudless sky, bottles of water and suncream were dispensed to the Rose of Tralee class of 2016.

The festival, like the All-Ireland hurling final, is a perennial reminder the Irish summer is nearly over.

The Ohio Rose, Kathleen Rose O’Donnell, meditated under a tree to get out of the sun. Her Irish connections stretch back to the Famine, but the fair skin persists generations later.

“My skin really burns. I wanted to sit and relax and get out of the sun. I like doing yoga.”

She was a picture of serenity as the other Roses gathered for their first media engagement. There are twice the number of Roses this year, 65 in total, two bus-loads instead of one – and twice the work for host Dáithí Ó Sé.

The organisers have decided to dispense with the regional heats and allow all 65 centres to send their Roses to Tralee. It will guarantee an upsurge in visitor numbers to Tralee and a frisson of tension on Sunday morning when 32 will be chosen for the live final.

“It’s hard to plan ahead when you are planning for something that might not happen,” said Ó Sé, now in his seventh year as host. He has been doing battle on the airwaves with the festival’s critics. There’s always the remote control, he says, and he invokes the spirit of Oscar Wilde: there is only one thing worse than being talked about and that is not being talked about.

The Offaly Rose, Emma Kirwan (18), is the youngest participant. Her Leaving Cert results are due today. She wants to study aeronautical engineering in the University of Limerick with a view to pursuing a career in the Air Corps.

More precisely she wants to fly the Air Corps Pilatus PC-9M training aircraft. This is a teenager who knows what she wants.

The New Zealand Rose, Hannah Greally (21), has had a hearing aid since she was eight.

“My parents thought it was selective hearing and that I was ignoring them. It turned out to be a little bit more serious than that.”

The hearing aids have been getting smaller, to the point that the one she wears behind her right ear today is almost invisible.

Wicklow Rose Jane Harrison (26) has been a personal journey since having a gastric band operation when she was 21. She was 23 stone. She spoke frankly of the misery brought on by fad dieting, overeating and bullying, of refusing to live in the present while looking forward to a future which could only happen when she took possession of her life.

“I found when I woke up 11 stone lighter that I was still not happy,” she said.

“A lot of emphasis goes on people’s goals instead of your self-esteem, which needs to be worked on. It took a long time for me to realise that my weight was a symptom not the problem.”