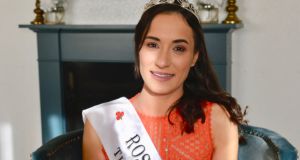 It’s a good year for the Roses and an even better one for Crescent College in Limerick.

The Jesuit school that produced such distinguished alumni as the pioneering minister for education Donagh O’Malley, the former chief justice John Murray, broadcaster Terry Wogan and actor Richard Harris has now triumphed in the two guilty pleasures of the summer, Love Island and the Rose of Tralee.

Three weeks after Greg O’Shea became the joint winner of Love Island, his fellow past-pupil Sinéad Flanagan was crowned the 2019 Rose of Tralee. She was three years ahead of him in school.

It was a great early birthday present for Dr Flanagan who will turn 28 on Thursday.

She only qualified as a doctor in May of last year after a circuitous route which involved eight years of study, four as a physiotherapist in the University of Limerick and four more years in University College Cork.

She confesses to not knowing her right from her left, but she still managed to win the Dr HH Stewart Medical Scholarship in medical microbiology in UCC in 2016.

She is now working as a locum junior doctor in a hospital in Mallow, handy training for the sleep deprivation which comes with being the Rose of Tralee where a round of early interviews are scheduled for the morning after the night before.

She has long been a fan of the festival and says she used to cry when the ballad, The Rose of Tralee, was sung after the winner is announced, but was overwhelmed with shock that she couldn’t cry on Tuesday night after her victory.

Once again the bookies were uncannily accurate. She was the bookies’ favourite and her odds were quoted at 7/4. “People had mentioned it in passing,” she said. “I find it hard to believe that anybody knew us well enough to know what was happening in that sense.

“We weren’t looking at our phones. We were just living in the moment with each other.”

She also missed the fuss surrounding the comments made by Newstalk host Susan Keogh who said the festival was not representative of modern Irish women and went on to inquire as to where were the fat women, the homeless women, the women from direct provision in the festival.

Dr Flanagan’s predecessor Kirsten Mate Maher condemned the comments in trenchant terms describing Keogh as an “attention-seeker” who was ignorant of what the festival was really about.

Dr Flanagan is slightly more diplomatic. She said the 32 women who were in the live final were a representation of “what it means to be Irish. It’s a celebration of family and of friendship. Just speaking for myself, I would like to think I was a modern Irish woman. For me it is definitely representative of me and 31 fabulous girl from all kind of professions and family.”

She hopes to carry on working and carrying out her duties as the Rose of Tralee.