Reward of €10,000 offered for information on missing Nóra Quoirin 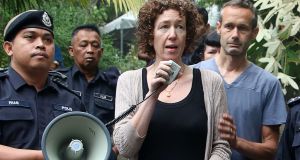 Meabh and Sebastien, the parents of missing 15-year-old Franco-Irish teenager Nóra Quoirin, standing with the police as they continue to search for her in Seremban. Photograph: AFP/Getty Images 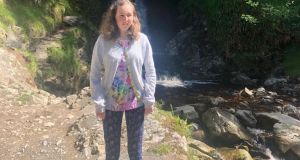 The family of missing Franco-Irish teenager Nóra Quoirin have offered a reward of 50,000 Malaysian ringgit (about €10,600) for information leading to the girl’s return.

Nóra’s mother, Meabh Quoirin, said: “Nóra is our first child. She has been vulnerable since the day she was born. She is so precious to us and our hearts are breaking.

“We are appealing to anyone who has information about Nora to help us to find her.”

In a statement that she read to the media on Monday, Ms Quoirin continued: “The police have been working extremely hard to bring Nóra home. In order to help their investigation, we have decided to offer a reward: 50,000 ringgit has been donated by an anonymous Belfast-based business for any information that directly helps us to find Nóra.”

Nóra disappeared from a Malaysian rainforest resort on August 4th. Her family had only checked in to the resort the previous day, intending to stay for a two-week holiday.

Her father discovered that Nóra, who has learning and developmental disabilities, was not in the bedroom she was sharing with her younger siblings.

Nearly 350 search-and-rescue personnel have been involved in the effort to find the teenager. Rain has made conditions difficult for the search and rescue teams, who on Monday were scouring the Gunung Berembun mountain in hot and humid conditions.

Expert indigenous trackers from the Senoi Praaq special unit and members of the elite 69 Commando unit of the Royal Malaysian Police have been involved in the search and helicopters and drones equipped with thermal imaging cameras have been deployed.

The Malaysian news agency Bernama reported that a group of five Islamic traditional medicine practitioners had come on Monday to assist in the search. The group conducted rituals, saying special prayers in areas of the jungle being searched, including at the river bank, and on the slopes of a hilly area near to the resort.

Police have set up a new hotline to try and receive more information from the public about Nóra, and there is also a number set up by the Lucie Blackman Trust, which supports the families of missing people.

The trust set up a special Facebook group to organise the distribution this week of 10,000 flyers about Nóra’s disappearance. They selected three collection points in Kuala Lumpur, but urged volunteers to circulate the flyers in other states such as Negeri Sembilan, where Nóra went missing, and Melaka and Johor.

Nóra’s family believe she was abducted and say she would never have wandered off on her own. Police, however, say the case is still officially that of a missing person and there is no evidence of foul play, but they add that they are ruling nothing out.

Negeri Sembilan police chief Mohamad Mat Yusop said on Saturday that concern was growing for Nóra’s welfare. “We do not know how long she can survive,” he said.

Britain’s National Crime Agency (NCA) and the Metropolitan Police are now assisting the Malaysian police. An Garda Síochána has deployed a garda liaison officer to Kuala Lumpur to assist the Department of Foreign Affairs, which is providing consular assistance to the family. The garda will liaise as required with the Malaysian police and UK and French authorities.

Mrs Quoirin thanked search-and-rescue teams for all they had done to try and locate her daughter. To aid in the search for Nóra, a recording of her mother’s voice is being played via loudhailers.

Her family issued a statement on Friday in which they described Nóra as “fun, funny, and extremely loving”, and “not like other teenagers … not independent”.