Results push Fianna Fáil ever closer to power and rehabilitation 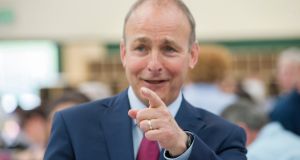 Fianna Fáil will take heart from its performance on local councils around the country, even while it regrets the handling of the party’s campaign in the Midlands-NorthWest European Parliament constituency.

Micheál Martin’s reconstruction of Fianna Fáil after its 2011 general election drubbing has been a steady process, with 2014, 2016 and now 2019 incrementally improving the party’s standing .

The last local elections in 2014 saw Fianna Fáil overtake Fine Gael as the largest party of local government and outpoll Enda Kenny by 1.5 per cent of first-preference votes.

This year, Fianna Fáil is on course to retain its lead in council seats and it may stretch its lead in first-preference share. Success in the locals five years ago led to a Dáil election in 2016, when it won 44 Dáil seats.

Yet the turnaround in Dublin – the cockpit that is now vital for any of the major parties intent on national power – has proven harder to achieve than it has in rural Ireland, at least until this local election.

Now, Fianna Fáil will be the largest grouping on Dublin City Council, having increased its vote right across the northside, especially in old heartlands such as Finglas, Ballymun, Artane, Donnycarney and Donaghmede.

There was also improvement in the southwest inner city. Party strategists, who wanted to rebuild among the urban working classes, were quietly satisfied. Where Sinn Féin collapsed, Fianna Fáil muscled back in.

It is now in a position to make general election gains in Dublin, such as in Dublin Central, where Mary Fitzpatrick, a Dáil candidate, won 3,218 first-preference votes in the Cabra-Glasnevin council ward.

Paul McAuliffe’s efforts to unseat Fine Gael’s Noel Rock in Dublin North West have been boosted by his success in bringing in a running mate, Keith Connolly, in the Ballymun-Finglas ward.

The improvement on northside Dublin, allied with more modest improvements south of the Liffey, allows Fianna Fáil look Fine Gael in the eye in the capital, at least for now.

This weekend is huge progress from February 2011, when the late Brian Lenihan was the only Fianna Fáil deputy returned to the Dáil. Just months later, that seat was lost in the byelection caused by his death.

Yet, as with 2014, the Fianna Fáil European election campaign was poor, even though Billy Kelleher and perhaps Barry Andrews are in line to be elected MEPs.

The performance in Midlands North West – where Brendan Smith and Anne Rabbitte were forecast, according to the RTÉ exit poll, to get only 9 per cent of first-preference votes between them – was truly shocking.

Repeating the primary mistake of 2014, when the party also ran two candidates but failed to take a seat in Midlands North West, and poor candidate selection warrant an honest analysis of what went wrong.

Despite the success at local level, the view of Dublin Bay South TD Jim O’Callaghan that there “is space” for a general election this year is not shared by senior party figures.

After all, why would Martin rush? His patient game of recovery, extending the confidence-and-supply agreement and allowing government wear down Varadkar and Fine Gael, is inching him closer to his ultimate goal of becoming taoiseach.