Martin McGuinness accuses DUP of only being ‘nominally’ interested in powersharing 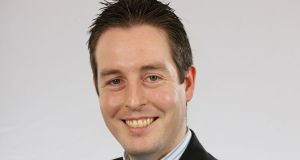 Paul Givan: the DUP Communities Minister said he had “now identified the necessary funding to advance this scheme”.

Sinn Féin has described as “too little too late” a decision by DUP Communities Minister Paul Givan to reverse his move to withdraw £50,000 in funding for an Irish language bursary scheme.

Amid growing pessimism about the prospects of avoiding the collapse of the Northern Executive and Assembly Mr Given announced on Thursday he had found the money to maintain the Liofa Irish language promotion scheme.

Mr Givan said that he had “now identified the necessary funding to advance this scheme” which allows about 100 people attend Irish language courses in the Donegal Gaeltacht.

Sinn Féin had characterised the removal of the grant which was announced two days before Christmas as “the straw that broke the camel’s back” in relation to the current political crisis.

Martin McGuinness, who resigned as deputy first minister on Monday in protest at DUP leader Arlene Foster’s refusal to stand down as First Minister, said the decision was driven “by crass and crude bigotry”.

He accused the DUP of acting “with disrespect and at times outright bigotry towards the Irish language, blocking an Irish language Act and withdrawing funding”.

Mr Givan however insisted he has no antipathy to the Irish language. “My decision on the Liofa bursary scheme was not a political decision,” he said.

While the DUP’s climb down was viewed as an olive branch towards Sinn Féin it failed to shift the party from its insistence that Assembly elections must be swiftly called by Northern Secretary James Brokenshire.

“I welcome the fact that it has been restored but, quite frankly, again too little too late,” said Ms O’Neill after meeting Mr Flanagan.

She said she wanted the powersharing institutions to work but that had to be on the basis of equality. “They have to be about delivering in terms of parity of esteem for all our citizens,” said Ms O’Neill.

“The DUP is in concession mode and this £50,000, which Mr Givan defended withdrawing on the basis that Irish already receives vastly more money than Ulster Scots just 24 hours ago, is just the start,” he said.

Alliance leader Naomi Long said that the DUP had approached a party colleague and asked them to join in lobbying Mr Brokenshire to suspend the powersharing institutions to facilitate talks rather than call elections. Mr Brokenshire repeated on Thursday that it was highly probable elections will happen. This most likely would be in early March.