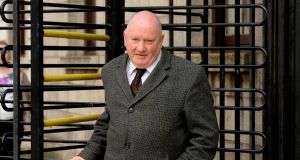 French satire magazine Charlie Hebdo would be in “clear breach” of the Republic’s “outdated” blasphemy laws, which need to be reformed, the secretary of the National Union of Journalists (NUJ) has said.

Séamus Dooley made the comments during a talk at the Drawing Freely exhibition at the Alliance Française in Dublin on Thursday.

The exhibition features nearly 50 cartoonists from across the world and works on the theme of freedom of expression.

“One area of direct relevance to this exhibition is Ireland’s antiquated blasphemy laws,” said Mr Dooley.

“We need to reform our outdated laws on blasphemy.

“It is a sobering thought that Charlie Hebdo would be in clear breach of Ireland’s blasphemy laws.

“The Constitutional prohibition on blasphemy has no place in the constitution of a modern republic.

“That means the right to offend. How that right is exercised in the context of humour and satire should not be prescribed by law.