Rent freeze Q&A: Could a Bill before the Dáil end ‘high-rent misery’?

Sinn Féin’s proposal is due before the House, but passage does not mean it becomes law 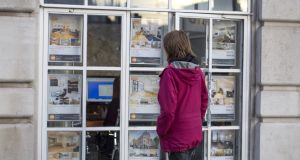 In pressure zones rents cannot be increased by more than 4% per year. File photograph: Getty

What is it that Sinn Féin is proposing?

The party’s housing spokesman Eoin Ó’Broin has published a Bill calling for a three-year rent freeze and an examination of a refundable tax relief worth 8 per cent of annual rental costs for all tenants. The Bill is before the Dáil this week.

It will pass the early legislative phase but is unlikely to get much further. It should pass second stage in the Dáil because Fianna Fáil has said it will support it.

Last month, Fianna Fáil leader Micheál Martin changed his party’s policy to one in favour of a rent freeze, telling the Dáil: “Thousands of people on relatively modest incomes are trapped in this high-rent misery. It is time for the Government to consider imposing a rent freeze, given the exorbitant levels of rent people are facing.”

However, it is unlikely the freeze will come into effect because Mr Martin’s party has said only that it will support the Bill in order to progress it to committee stage of the legislative process for further scrutiny.

Housing spokesman Darragh O’Brien sounded lukewarm concerning the rent freeze idea on Tuesday. The general election is also expected in the first half of next year and the legislative timetable is also seen as too tight.

Are restrictions on rent rises not already in place?

Yes, the Government introduced rent pressure zones three years ago. These are designated areas where rents cannot be increased by more than 4 per cent per year. But the Opposition have said this has proved insufficient to deal with rising costs of renting in Ireland.

The Government counters by saying Economic Social Research Institute research has shown that rent inflation in pressure zones has fallen in comparison to other areas.

Are any other countries introducing rent freezes?

Yes, a proposal from the Left Party housing minister in Berlin for a rent cap is set to be introduced formally in the German capital next year. Berlin has faced similar problems of increasing rents, with corresponding demands for action from local government to tackle the problem.

Government sources here are pointing to Berlin as evidence that rent freezes do not work and affect the supply of new homes. It is argued by those in the Fine Gael-Independent minority coalition that applications for building permits in Berlin have fallen by 40 per cent in the year to September 2019.